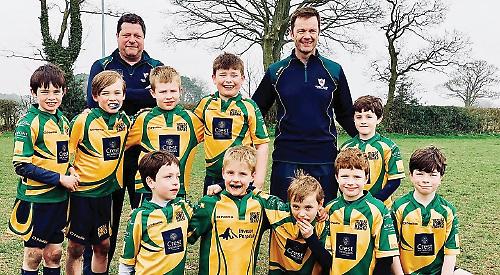 YOUNGSTERS at Henley Rugby Club took part in the Holt Rugby Festival last Sunday as part of a club weekend tour to Norfolk.

The under-eights fielded three teams with each playing five games, recording a combined result of 11 wins, three draws and one defeat.

The squad demonstrated some fantastic playing skills with a number of opposition coaches giving positive feedback on how the teams conducted themselves.

Thirty-two players from the under-nines squad made the trip and were split into three teams.

Henley Eagles ended with five wins from their five matches while the Kestrels and Falcons teams came away having won two, drawn one and lost two.

The under-10s took with them a party of 31 children, split into three teams, competing in two pools.

Henley Vultures played five games, winning three and played out a hard-fought draw with the hosts, Holt. Their final game was a one-try defeat at the hands of Datchet.

Tries were scored by Coleman, Butler, Renders, Mercer, and Coultas to name a few.

The defensive effort was enormous, only conceding three tries across the five games thanks to some hard tackling from Renders, Bottomley, Turner and Tong.

The team is increasingly more confident and as a result more powerful in the rucks and mauls with Bottomley, Coleman and Renders all rucking superbly, driving over the ball and ripping the ball away from the opposition.

On one occasion, Edwards single-handedly drove a defender off the ball in a powerful ruck close to the opposition’s try line which led to Henley gaining possession and scoring a try and one for Isaac Ahmed, who made a great tackle right in front of the crowd of delighted onlookers.

The Henley Eagles took a while to warm up but they won their last three games without conceding a try. They did this against some strong competition, including the tournament hosts, while scoring 14 tries.

During the solid defensive play in these matches, there was strong tackling by William Tavinor, Dylan Price and Thomas Ferguson and some great rucking by Jacob Robinson, Leo Golledge and Felix Baker while the really impressive aspect was their defensive line that continually pushed the opposition backwards to gain territory.

Throughout the day, but especially during the last three games, the strong defensive performance was outweighed by some classy attacking play.

There were some great passages of play during these matches where Ethan Shuttleworth’s speed and tenacity combined well with some great offloads by Xander Cantellow to bring him a well- deserved try. Some strong running by Henry French led to his try and excellent positional support play from Felix Cooper, together with his scintillating speed, brought him three well-deserved tries.

In addition to their defensive contributions, Felix Baker with two tries and Tavinor with one demonstrated their all-round ability. The standout try scorer for the Eagles, though, was Thomas Ferguson who, as well as contributing to the defensive performance with numerous tackles, collected eight tries.

The under-10s ran in a total of 19 tries in their five pool matches against without conceding a try in reply.

Such was the intensity of their attacking and speed of their passing, combined with an impenetrable defence, the boys showed a real energy that was great to see from the touchline.

Rob Murdoch was in bullish form driving the ball up in the midfield and offloading to the likes of Jack Bradbury and Alex Clark, who demonstrated great footwork in taking their tries.

Charlie Rees demonstrated his usual level of commitment and drove himself into the opposition without fear and Rory Cordingley turned over a number of opposition balls at the ruck which led to scores.

Sam Snowdon put in some penetrating runs while captain Seb Phillis played with an intensity and maturity beyond his years. Alastair Hall and James Waggett also put in some great tackles and offloads contributing to a number of scores.

The under-11s rounded off their season in style playing five matches against teams from Norfolk and Suffolk, running in 29 tries while conceding just twice in an unbeaten run.

Up front, Alfie Malcolm bossed the set pieces winning several hooks against the head. Tom Smith, Arthur Schrier and Laurence Walker were always in the thick of the action setting up the perfect platform at the rucks and mauls for Ollie Johnson and Ben Horner, sharing the scrum half duties, to release the Hawks runners of Seb Bourne and Sam Winters who paired well to cut through defences and share 15 tries between them.

Sam Bailey made numerous rampaging runs and was ably supported by Will O’Hagan at fullback while Max Cranstoun and Hunter Rey both crossed the line from the wing rounding off some flowing moves.

Meanwhile, Will Corbett was never far away from the action combining great game reading skills with ferocious tackling.

• Henley’s teams stayed at Overstrand Hall for two nights and took part in an activities day on Saturday.