Purchase picks up two tries as undefeated Colts march on 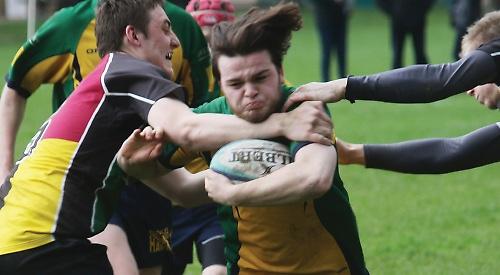 HENLEY Hawks Colts continued their unbeaten league season against a Windsor side that fielded a formidable pack and had pace in the backline.

The hosts opened the scoring with a penalty but Henley responded with two tries by moving the ball quickly through the hands and creating overlaps.

The first came through Harry Wray gaining ground on the right wing who switched direction with slick passing enabling Tom Purchase to go over on the left flank.

Henley continued to exert pressure and Windsor conceded a penalty in front of their posts which Ben Venner converted.

Straight from kick-off, Henley charged into the Windsor half to win the ball and, following some neat inter-passing between backs and forwards, Purchase scored his second try after another strong run. Venner kicked both conversions to provide Henley with a solid 17-3 lead.

Urged on by their home supporters, Windsor fought back. Both sides were admirable in their tackling, Henry Heath and Rhys Edwards at centre were solid for Henley, whilst front-row forwards Scott Carey and Tom Grenfell were also effective in defence.

The second-half scoring was opened with a try from Tom Priestley via the relatively unusual method at this level of a rolling maul.

Windsor were again stunned into action and penetrated deep into Henley territory where some hard running and quick recycling created a well-worked try.

They might easily have scored again but they were thwarted by some superb cover tackles from Venner and then Will Parton, who was excellent at fullback.

Henley scored next as they upped the tempo in the last stage of the game, forcing Windsor into a wild pass which Ben Stacey intercepted and proceeded to outpace the cover defence to score under the posts.

Venner converted the try and then rounded off the scoring with a second penalty.