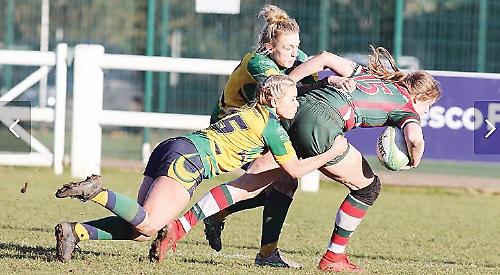 THE Hawks secured a losing bonus point to ensure they finished third in the Women’s Championship South with a game still to go, writes Lizzie Hearn.

It had been seven weeks since their last match and Sunday’s fixture had been postponed twice due to snow.

The first half did not go to plan for the hosts as knock-on after knock-on allowed Bath to gain territory. Eventually they were able to suck Henley in, allowing their fullback to run in untouched and the try was converted.

The Hawks continued to defend in their own half as again passes weren’t going to hand and
knock-ons gave Bath the ball.

The forwards, plus Sophie Thompson and Carly Dudding, were tackling well but the Hawks defence was narrow which allowed the Bath winger to find space and go over the whitewash, which was again converted to make it 14-0 at half-time.

After the restart, Henley came out fighting and for the first time in the match found themselves in the Bath half. The forwards were securing the ball well at the breakdown allowing the ball to be played quicker. Ann-Marie Solowin and Lizzie Hearn were making yards going forward which brought confidence and the Hawks began to kick to turn the defence. A quick ball allowed Dudding to beat the first defender and dummy the fullback to go over the line.

Bath then gave away a series of penalties with the Hawks opting for the scrum. The last of these, given for offside, allowed the backs to run and Craig held the last defender long enough to put Thompson over for their second try.

A fumbled restart gave Bath the scrum but the hawks back line let no one through. A desperate kick from Bath meant the hawks had an attacking line with 24 seconds to go. With 80m ahead of them the Hawks secured the line-out and set a driving maul which the forwards moved about 20m. Tight carries were making ground and by this time four minutes had passed but a knock-on ended the game.

The match saw Pip Timmins and Solowin play their 100th game in a Hawks shirt while both teams wore odd socks to raise money for Cancer Research.

The Hawks host Plymouth at Dry Leas on Sunday, kick-off 2.30pm. It will be captain Carly Dudding’s final game before retiring after 14 years at the club.