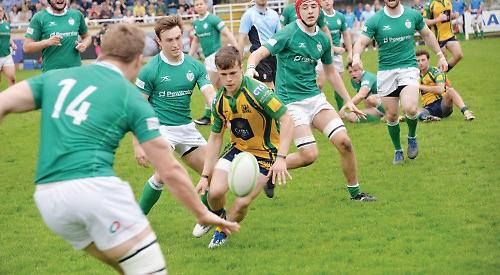 HENLEY HAWKS’ disappointing end of season form continued as they fell to their fourth consecutive defeat at the hands of London Irish Wild Geese at Dry Leas on Saturday.

With the Hawks comfortable in mid-table, it was the Irish, fighting for their survival in this division, who were well organised and committed, outscoring the Hawks by six tries to three, running out comfortable winners with maximum points.

The Hawks, with a number of youngsters in the ranks, had parity for some of the game and indeed looked like they may pull away for victory when they took the lead in the second half.

But eventually they fell away badly and conceded four tries in the last 20 minutes that gave the visitors the initiative they needed to see out the match.

The opening exchanges were fairly even with youngsters Will Janes and Toby Howe showing some good touches as the Hawks tried to play at pace while the visitors used their large back row forwards to carry the ball.

But it was the Irish backs who posed the most problems with Owen, Cunningham and Hodgkinson a constant threat.

It was a good break by Hodgkinson that set up a drive for prop Zaki Chamnaoui to score the visitors’ first try which was converted by Alex Seers. With the Irish scrum dominant, the visitors increased their lead soon afterwards when a Henley attack broke down and George Owen pounced, kicking the loose ball forward and beating the covering Henley defence to score and go 12-0 in front.

The Hawks, playing with plenty of commitment at this stage, responded with a good try from Janes. Henley made their way into the Irish 22 and a long pass from Howe found Janes who broke clear with a good hand-off and scampered through to score and George Jackson converted.

Both sides cancelled each other out as the half came to a close. Xavier Andre had some good touches for the Hawks and Dave Clements, playing his last home game before retiring, as always led by example and constructed some good drives in the wide channels.

The Hawks came close just before the break when good driving play from Tom Emery, Dave Hyde and Brad Cook set up a good position under the Irish posts. But their efforts were in vain as the referee penalised the Hawks at the breakdown and the chance was lost, ending the half with the visitors leading 12-7.

The Hawks came out for the second period with purpose with Clements leading from the front.

They mounted a sustained attack on the Irish line with Toby Venner going close. Eventually the Irish defence was breached when Hyde made good yards before slipping the ball to Andre who crossed for the try which Jackson converted to put the home side in front.

Tommy Haynes, also appearing in his final home game, then left the field to rapturous applause from the home fans.

Henley continued to attack and extended their lead after a fine break from Liam O’Neill that cut through the London Irish defence and allowed Janes to cross for his second try.

It looked at this stage as though Henley would go on and complete a comfortable victory but the Wild Geese had other ideas and upped their game with increased intensity and commitment that the Hawks could not match. The home side lost all momentum and concentration as the visitors scrapped for their status in the division.

A miss-pass and a good move involving Cunningham and Meesom saw Cunningham cross for the Irish and although the conversion was missed, the visitors regained the lead seven minutes later.

A good break from the Irish backs seemed to come to a halt deep in the Henley 22 but Owen chipped over the static Hawks defence and gathered the ball to score a fine individual try. Alex Seers converted.

As Henley continued to fade, good interplay from the Irish forwards led to a try for Scott Moore, again converted by Seers.

To complete a dismal afternoon for the Hawks, the Irish scored again just before the end through Seers who collected an excellent cross kick to seal a vital win for the visitors in their quest to avoid the drop.

The Hawks will be disappointed that they didn’t go on to win this game but will be encouraged by the performance of a number of younger players in the team that bodes well for next season.