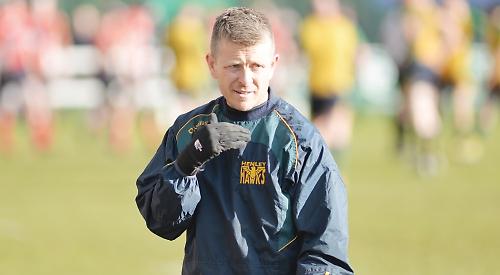 HENLEY HAWKS are seeking a new head coach after Pete Davies relinquished his post at the club on Wednesday.

After eight years of coaching at Dry Leas Davies left the club with the Hawks in ninth place in Division 2 South.

Davies had led the club through two promotion seasons in 2012/13 and 2014/15 with the side relegated from National Division 1 the following year on both occasions.

This season the Hawks looked set for a top six finish after a slow start to the season but ended their campaign with five successive defeats, the last of which was a 52-0 drubbing away to local rivals Redingensians.

After leaving the club Davies thanked the various coaches and staff who had helped him during his time at the club. Davies said: “I would like to thank the coaches, Mike Poulson, Steve Barnes and Nigel Dudding in particular along with the physio and medical teams for their support throughout my time at the club.

“Finally I would like to thank the players, coaching team and the club for the memories and friendships I will cherish forever.”

Director of rugby Nigel Dudding added: “Pete has been an outstanding servant for the club over 20 years as a player in the Allied Dunbar premiership and more recently as head coach. His rugby knowledge, passion, vision for the game are exceptional.

“We wish him well for the future.”

Following Davies out of the door at Dry Leas will be lock and captain Dave Clements who announced his retirement from the game. Clements, who had captained the side this season, had been at the club for 10 years.