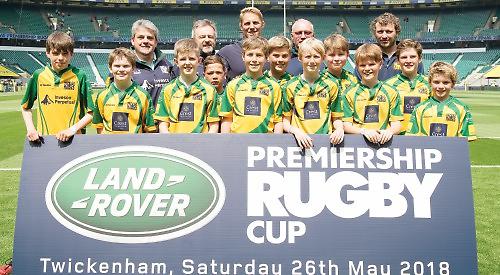 THE Aviva Premiership Rugby season may be over for another year but memories of the 2018 final will live long in the memory for youngsters from Henley Rugby Club after they got to experience a special day out at Twickenham Stadium.

Thanks to their involvement with the testimonial season of the Land Rover Premiership Rugby Cup, Henley U12s headed to rugby headquarters on bank holiday weekend where they shared the turf with World Cup winners Lewis Moody and Jason Robinson.

That came after they secured their spot at the showpiece event at the Land Rover Premiership Rugby Cup festival hosted by London Irish.

Their reward for their efforts also included the chance to watch Exeter Chiefs and Saracens battle it out for the title as well as meeting with former England stars Moody and Robinson pre-match.

Henley player Hector Harvey was additionally awarded the honour of being his team’s most valuable player, and the 11-year-old admitted the whole day had been one to savour.

Harvey said: “It was brilliant to come to Twickenham as I love the ground and the atmosphere was just incredible. It’s something I’ll never forget.

“The festival was so good and we came up against some top teams. They were all really good and it was great that we managed to make it to Twickenham.

“It was a dream come true for us to walk out on the pitch and experience all the atmosphere around the Premiership final, we won’t forget this anytime soon.

“Getting the chance to meet Jason Robinson and Lewis Moody was also really special as they are such legends. It’s fantastic to be the most valued players as it was such a shock.”

Henley were one of 24 U11 and U12 teams in attendance for the final – representing two sides for each age category from the festivals hosted by each of the 12 Aviva Premiership Rugby clubs throughout the season.

This campaign represented a milestone season with this the 10th anniversary of the national grassroots rugby initiative.

Over the course of the last decade, more than 82,000 youngsters have participated in the tournament, with Moody, who is a Land Rover ambassador alongside Robinson, praising the opportunities afforded to the rugby players at such a young age.

“It’s a unique chance to walk and be on the hallowed turf of Twickenham so for these youngsters it’s a great opportunity as it’s such an impressive environment,” he said.

“It’s awesome that you can bring kids through and see them enjoy an experience that I’ve also enjoyed. It’s one of those experiences that only comes around once in your life.

“It’s a unique day created by the Land Rover Premiership Rugby Cup, it’s really special and it brings teams from all over the place together to play against each other.”

The Land Rover Premiership Rugby Cup has concluded its testimonial season. In the last decade, more than 82,000 youngsters have participated in the grassroots tournament, enough to fill Twickenham Stadium.