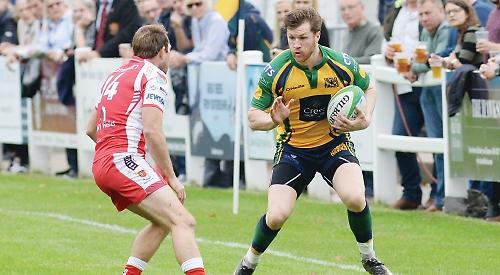 A WELL-DRILLED and organised Henley Hawks side began their new league campaign with a thrilling victory over Bury St Edmunds in Suffolk last Saturday.

Despite being under pressure from the kick-off, an overthrown attacking line-out from the hosts was picked up by a grateful Hawks. The ball was recycled well and debutant, Sam Randle raced away under the posts to put Henley 7-0 up.

It didn’t take Bury long to get on the scoreboard. Directly from the re-start, a Hawks infringement gave the hosts a chance to cut the deficit, which they duly did, making the score 7-3.

A few minutes later, Bury took the lead following a superbly worked team try which saw Nick Perez cross in the corner, much to the delight of a large home crowd.

That was about as good as it got for the home side in the first half as a feverish Hawks, with the bit between their teeth, stamped their authority on proceedings.

A Xavier Andre try by the posts following a mistake from the home side gave Joe Butler a simple conversion to make the score 14-10.

The hosts reduced their arrears to within a point with a penalty but, with Marcus Lowe in the sin bin, the Hawks put together some slick passing which gave Sam Portland the opportunity to race away through the defence for a fine try that was well converted from the touchline by Butler.

But then, after a period of sustained pressure, their number eight, Tuidriva Ura reduced the deficit again when he dived over the line to make it 24-18 at the break.

The Hawks started the second half with real purpose. With less than two minutes on the clock, a Butler box kick fell invitingly into the fly-half’s hands and a great offload saw another debutant, Sam Lunnon, race in untouched.

Butler converted and the lead was stretched to 31-18 with a try bonus point in the bag for the Hawks.

It was to get even better for Henley. Following some superb forward play, the Hawks were awarded a penalty try and a yellow card for Bury’s Sam Bixby, making it 38-18.

But with 20 minutes left on the clock, the home side finally woke up. With Jake Albon in the bin following a series of penalties, Pat Robinson found space in midfield and forced his way over by the posts.

With the score now 38-25 the Hawks couldn’t believe their luck when they found themselves in a four-on-two position and man-of-the-match Butler finished the move off with another converted try, which seemingly put the game out of reach.

To give the home side credit, they finished the match strongly, with two tries scored in quick succession to bring the score back to 45-37.

The last play of the game saw Ritchie miss a penalty for the hosts which would’ve seen them snatch a second bonus point.

As it was, they had to settle for the one point and a maximum five-point return for a jubilant Hawks side.