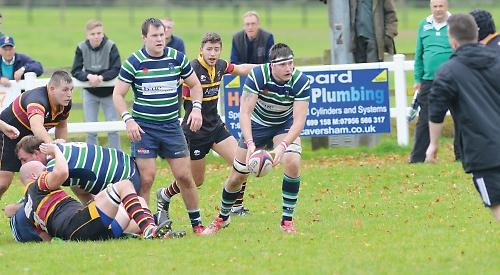 A LATE flurry of tries overcame a stubborn Littlemore as Abbey won by a bonus point grabbing five tries in this Wadworth 6X Southern Counties North League match of the season where skipper Will Bevan scored a hat-trick in his man-of-the-match display for the hosts.

There’s a fresh enthusiasm around Rosehill with coach Luke Harding making his first start to a full season leading to an influx of new players shown by six debut starters and a seventh on the bench.

Littlemore are at their highest ever league level, promoted from second place out of Berks/Bucks and Oxon Premiership, doing well to thwart Abbey’s early territorial domination and then to take their chances when they came.

The first half hour was all Abbey as they swarmed over the pitch with lots of movement from the backs benefiting from good recycling from the pack, with an entirely new starting front row of Razz Dranca, Matt Hart and Ed Woodger. It took 20 minutes for the points to arrive, first an unconverted try from second row man Matt Simons followed by a penalty goal from centre Ollie Walton.

Littlemore stuck to their task and in their first meaningful incursion into Abbey’s half, scrum half Jake Dawson found the smallest of spaces to squeeze through on the left and scamper to touch down, the added points going astray.

Abbey continued to press. Bevan, defending a two-on-one position, stole the ball, kicked ahead, was first to the ball, gathered a kind bounce and took the first of his hat-trick of tries. Ollie Walton kicked the extras, then added three more points on the stroke of half-time, knocking back the hopes of Littlemore as winger Johnny Gerrard had gone over for their second try wide out, the conversion going begging.

Turning around at 18-10 ahead, Abbey opened with a series of penalties and spurning the kick for posts, they opted for a touch and drive and then scrums, but a determined Littlemore kept the home side out.

Frustration at the lack of reward saw second man Jeremy Knights yellow-carded on the 12th minute but any encouragement Littlemore might have felt by having a man advantage was dented when Ollie Walton extended Abbey’s lead with his third penalty.

The visitors stuck to the task, moving their ball with precision and speed when they had the chance. A 20th minute converted try, a quick tap penalty from scrum half Dawson with Stuart Beale taking the extras, brought Littlemore within touching distance, just four points shy of Abbey’s 21.

Abbey finished by far the brighter with three tries, two from Will Bevan, one from Ollie Walton who kicked a conversion to bring his personal points tally to 18, capping a good afternoon’s work of smooth distribution, and good footwork.