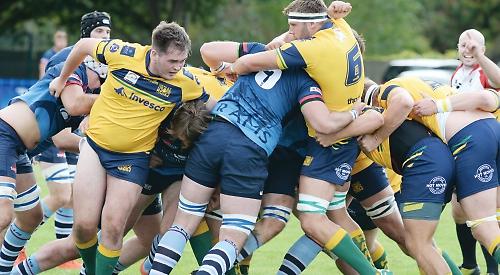 HENLEY HAWKS had to settle for second best in the derby clash against Rams at Old Bath Road on Saturday.

The Rams were too good, well drilled and outscored the Hawks in the end by seven tries to two and on this performance they will be one of the serious challengers for the league title.

The home side turned the screw in the second half starving the Hawks of worthwhile possession and dominating the set pieces.

That said, the Hawks more than matched the Berkshire side in the first half hour, taking the game to the Rams and creating a number of their own chances. They also gave it their all, right to the final whistle.

The opening exchanges were fast, physical and even as both teams tore into each other. The Rams were surprised at the Hawks’ physicality and the home side was pressurised into making a number of handling errors which the Hawks capitalised on.

Dave Hyde, Tom Emery, Marcus Lowe and the impressive Alex Bradbury were at the forefront of the Hawks’ good work early on. From a driving line-out, centre Connor Morrison, Hyde and Emery went close but the Rams defence held firm.

A break from former Hawk Robbie Stapley was snuffed out by Joe Butler and further pressure from the visitors led to another attacking line out. A good drive from the forwards won a penalty and Joe Butler converted it to give the Hawks the lead.

However, there were ominous signs from the first scrum as the Hawks pack were pushed back under great pressure from the Rams eight.

The Rams gradually began to find their feet and although not fluent at this point, they created a chance for Alex Seers to throw a dummy and score.

The Hawks responded well. A good break from Connor Morrison was well supported by Alex Bradbury but Jack Robinson was stopped just short of the corner flag.

A good drive from the Hawks pack resulted in a penalty and yellow card for the Rams’ Ben Henderson. Henley turned down the kick at goal and from the resulting line-out, a good drive was finished off by Tom Emery who touched down for the Hawks’ first try.

The Hawks tackling was ferocious but back came the Rams and after working their way deep into Hawks territory, scrum half Miles Lloyd crashed over for a try which Alex Seers converted.

It was at this point that the Rams were really beginning to exert some control over the game and after a Henley error, and a quick penalty from Lloyd, a solid driving maul from a line-out finished with Tom Vooght crossing to give the Rams a 17-8 lead at half-time.

The second half was a story of the Hawks spending long periods in their own half. The Rams were a yard quicker, but more importantly controlled possession and despite some heroic Hawks defence at times, gaps started to appear for the home side to exploit.

Lloyd controlled the game for the Rams and a yellow card for the Hawks’ Simon Perry put extra pressure on the Henley defence. Eventually that pressure told and Colin Thompson crossed for the Rams’ bonus point try.

The Hawks kept their spirit and were rewarded with a try from Sam Lunnon who finished a good short side move involving Hyde.

The Rams continued to dominate and after a series of scrums where the Hawks were under immense pressure, Robbie Stapley crossed for the Rams fifth try which Seers converted.

Henley’s commitment was good right to the end but further tries from Baker and Duffelen ensured another comfortable victory for the home side.