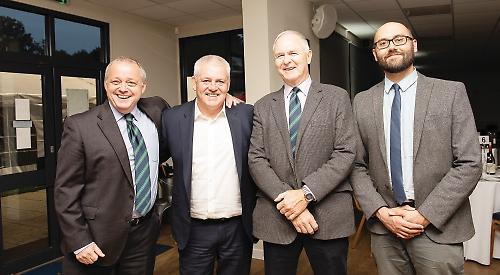 WARREN GATLAND was the guest speaker at a dinner at Henley Rugby Club on Friday night.

The Wales head coach spoke to the audience of 120 guests about being head coach of the British and Irish Lions when they toured Australia in 2013 and his native New Zealand in 2017 as well as when he was director of rugby at Wasps and used to visit Dry Leas for 2nd XV matches.

Alistair Beynon, the club’s commercial manager, said: “It was a really good evening and Warren was fantastic, very open and very honest, which was refreshing.

“He was a real hit. Getting this sort of name to the club is fantastic.” The MC for the evening was former Wales player Adrian Davies.

There was an auction with prizes including a hospitality package for the Wales v England Six Nations game in Cardiff in February, a signed Lions shirt and a signed Anthony Joshua boxing glove.