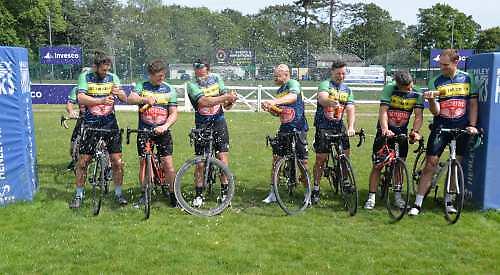 CYCLISTS sprayed each other with beer after finishing a 650-mile bike ride for charity.

The eight riders had cycled from Redruth in Cornwall to Henley Rugby Club in just over six days.

They were raising money in memory of former Hawks fly-half James Comben, who died of cancer in August last year.

On Saturday — the final day — they were joined by another 40 players, friends and family on bikes at Redingensians Rams Rugby Club in Sonning to complete the last leg. As the riders reached Dry Leas, they were greeted by more than 150 supporters, including friends and family.

They then opened some beers and enjoyed a barbecue followed by a raffle.

The riders, who are all former rugby players, have raised more than £20,000 for cancer charity Bloodwise.

The challenge was organised by former Hawks players Simon Perry and Tom Allen, who both played with Mr Comben. They started the ride on Monday last week and visited 19 rugby clubs along the way.

Mr Allen said: “It was just something that we wanted to do as a group and to do something significant for his family. I think he would have thoroughly appreciated everyone’s efforts.

“It’s the hardest thing we have ever done and everybody struggled. It was a mixture of extreme relief and extreme pain when we finished — absolute physical exhaustion.”

Mr Perry said: “I was quite emotional at the finish. I felt a mixture of relief and awe. Rugby is like a family — when things happen to each other you take it very personally.”

Nigel Comben, James’s father, said: “I am absolutely delighted and the effort in the challenge itself was just enormous. We are in awe of them — it’s absolutely fantastic.

He was joined at the ground by his wife Liz and daughters Christa Wilton and Susie Comben.