Hawks back to winning ways 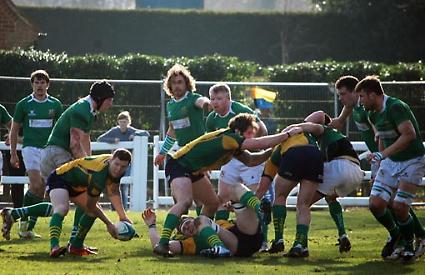 With the sun on their backs the Hawks played the kind of fast flowing rugby that had earned them promotion to Division 1 last season. The tries were shared out, five by their backs and three by forwards. This broke the dismal record of just winning one game in the last nine.

The foundation of such an impressive victory was a tribute to the throwing, usually to the back of the line, of Liam Dwyer on his return from injury and their line out forwards, particularly Matt Payne and Dave Clements both also just recovered from injury.

They also had a firm grip on the set scrums where Billy Moss and Alec Penny were instrumental in gaining three heels against the head.

With such good possession the backs threatened the Wharfedale defence with their speed, handling and incisive running.

Although they opened their scoring with a penalty, for offside, after only two minutes by fly-half James Comben it was pressure by the forwards that created their first try with a drive for the line resulting in Payne forcing his way over to make the score 8-0 as Comben was to find it difficult to convert close to touch left of the posts.

The Hawks had a monopoly of possession for the first 20 minutes of the game before Danny Wells could secure a touch down to make the score 13-0. Following this Wharfedale made a rare visit to the Henley half but fly-half Tom Barrett took advantage to put them on the board after 23 minutes with a penalty from 40 metres.

Immediately after this that the Hawks started to cash in on their quality possession from line outs. They used this to develop handling movements by their backs from right to left. They did this so effectively that the visiting defence was unable to stop them scoring two tries in the space of five minutes. These were finished off by left wing Christoph Bart. The first by means of a classic hand off, the second after a searing break by Danny Wells, converted by Comben, to make the score 25-3.

The Hawks were now looking in rampant form and when they again pressed on to the visitors line, alert scrum-half Ollie Frost noticed the incapacity, through injury, of his opposite number and leapt on a loose ball over the line to take the Hawks lead, with Combens conversion, to 32-3.

Frost, with a swift service on his debut, struck up a useful partnership with Comben which, as a result, gave the Hawks the opportunity to capitalise on the quality possession supplied by the forwards.

This brought a further reward when the Hawks attacked down the right and some swift handling was finished off by Bart, over from his left wing. His first half hat-trick of tries earned him the award of man-of-the-match.

Trailing 37-3 at half time, Wharfedale struck back when a forward drive led to prop Jake Armsrong being awarded a try which was quickly converted by Barritt who indicated that the game was not all over.

The Hawks were not prepared to surrender their advantage and they retaliated by setting up a driving maul which resulted in a try for number eight Robbie Stapley.

The Hawks were still creating opportunities for their backs none better than when Wells made a break with Xavier Andre on hand to run in a try from near half way but a delayed pass stifled the chance.

Tthe Hawks then loosened their grip on the game for the first time when lock Dave Clements was despatched to the sin bin for a technical foul and they were prone to give away penalties for not releasing the tackler.

The Hawks defence was put under pressure on their own line and after defending effectively they were not able to stop replacement Nick Taylor scoring out wide on the right.

With continued pressure they then scored down the left when wing Scott Jordon slipped a tackle. Taylors try was converted by Barritt to reduce the arrears to 42-22.

Over the last five minutes of play the Hawks steadied matters when Wells, place kicking in place of Comben who had left the field with a blood injury, kicked a penalty from 30 metres from centre field.

The Hawks composed themselves and when Tom Allen, at number 10 in place of Comben, made a break towards the right touch line, skipper Ryan Newman touched down. This try was converted by Wells to complete the 52-22 scorline.