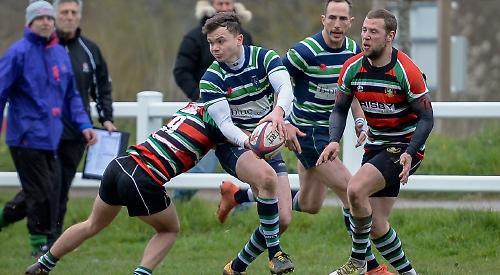 AN Abbey side lacking experience behind the scrum suffered an unexpectedly heavy defeat in the local derby at Holme Park last Saturday.

With both sides having lost their opening two league matches, a close encounter was anticipated, but the visitors conceded seven tries and rarely looked in contention despite enjoying parity at the scrums.

Abbey are now bottom of Wadworth Southern Counties North, and only they and Didcot have yet to register any league points.

Abbey were confined to their own 22 straight from the kick off and despite good tackles from second row Gerry Sutherland and prop Jack Stevenson they were soon in trouble, conceding a penalty inside the third minute but the kick bounced wide off the left post.

Abbey winger Jack Brown ran the ball clear of immediate danger and the first of many fine tackles from flanker George House halted Reading when they retrieved possession. However, a speculative run by winger Stuart Borthwick forced a gap in the visitors’ defence, and after centre George Dear had backed up well, skipper Andy Parr crossed for a fourth minute try in the right corner. Birch saw the ball topple from the tee as he attempted the conversion, and his hastily-attempted drop kick was wide of the mark.

Abbey began to settle after this setback. The first scrum was steady, and after lock Toby Staker had won a lineout, number eight Conor Slaven and George House both made ground. Then outside half Arron Ross made a break, and with support from prop Adam Postlethwaite play reached the Reading ten metre line. Staker made further progress, and after Reading had briefly stolen possession, George House’s tackle earned his side a penalty. Malivoire struck the ball well from 30 metres and Abbey had points on the board.

Borthwick then set off on a diagonal run to the left for the hosts. Dear supported his winger once again, and the centre’s pass released winger Chris Grieg-Jenkins who sped across the line for a good try. The wind diverted Birch’s conversion attempt at the last second, but Reading now led 10-3 after 11 minutes.

Abbey enjoyed what was probably their best spell of the game in the next 10 minutes. Flanker Ed House, along with Slaven, Sweeny, Ross and Postlethwaite, combined in a passing movement which gained Abbey a penalty in the home 22. Ross kicked for the corner, and after the resulting maul Reading number eight Rob Cunningham was yellow carded. Abbey elected to go for a scrum, but good defence stopped the combined efforts of Slaven and Stevenson with play almost on the home line. Abbey were awarded another scrum, and after Malivoire ran to the blindside, Sweeny’s pass gave winger Christian Floyd a debut try in the left corner. Malivoire struck his conversion well, but the ball dipped under the bar.

Three tackles in quick succession by George House kept Reading at bay, but after a brave catch by Boucher, Abbey were caught offside. Birch at last had some success from the kicking tee, and Reading went 13-8 up with almost half an hour played.

Soon afterwards, Chris Shaw came off the bench for his first appearance after missing the start of the season through injury to replace Staker and was soon in the thick of the action. Both he and skipper Matt Hart tackled well, but a long break from home prop Gavin Egan gave Grieg-Jenkins the chance to take play back into the Abbey 22.

Half time was approaching, and Abbey were unfortunate when a kick ahead bounced off a home player’s shoulder. Dear reacted quickly and claimed the loose ball and ran towards the right and passed to his co-centre Grant Spears, who burst through Boucher’s attempted tackle to score Reading’s third try. Birch was unable to convert, and the first half ended soon afterwards with Reading leading 18-8.

Abbey made two changes at the start of the second half, with Jake Leach coming on for Hart and Staker returning at the expense of Sutherland.

The visitors started confidently, despite losing an early lineout, and good tactical kicks from Malivoire and Floyd kept play in the home half. Ross made ground from a scrum, and Slaven and Shaw supported well. However, when Ross was next in possession, his pass was intercepted by replacement prop Ed Whelan, who had only been on the field for two minutes. The former Abbey player showed incredible pace over 40 metres to score the unconverted try. In the 54th minute outside half Alex Murray-Smith completely wrong-footed Ross and sprinted through a huge gap in the Abbey defence which Birch converted to make it 30-8.

Birch was replaced at this point, and soon afterwards full back Alex Dorliac took over the kicking duties to land a penalty which further extended his side’s advantage.

Grieg-Jenkins then received the ball close to the halfway line, and in a fine swerving run he accelerated past three Abbey defenders on his way to the line. Dorliac converted to make it 40-8.

Soon after Reading won the ball again a towering kick to the right corner resulted in Dorliac catching well before being driven over for a try which he could not convert.

There was time in the final five minutes for a brief Abbey revival. Staker and Malivoire ran well to take play into the home 22, and after a good tackle from Brown, Reading were penalised. Malivoire kicked to touch, Staker won his cleanest ball of the afternoon, and a fine drive saw George House cross for a consolation try. Malivoire’s conversion again dipped under the bar.