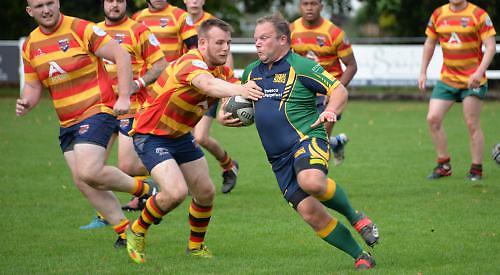 HENLEY VIKINGS maintained their unbeaten start to the season with a nine-try demolition of Bicester at Dry Leas last Saturday.

Playing on the first team pitch and with a full complement of substitutes, expectations were high for the home side.

This was only slightly tempered by the vigorous warm-up demanded by coach Mark Venner, which resulted in a dislocated finger for returning prop Charlie Chavasse and a broken nose for winger Olly Vine, but both were able to play a full part in the game.

The warm-up damage did not dampen enthusiasm and in the very first play, the Bicester prop had to leave the field for good, after being injured by the rampaging Vikings chasing the kick-off. This led to a whole game of uncontested scrums, which blunted one of the anticipated Viking attacking options.

The Vikings soon began to establish dominance over an inexperienced Bicester side and tries began to flow at regular intervals. Strong forward charges from the powerful Chavasse, Ross Gilbert and newcomer Chris White created plenty of opportunities, and by half-time the score was 22-0, with the Vikings having earned a bonus point by scoring four tries.

The second half continued in much the same vein and another five tries were scored to bring the final score to 53-0.

Of particular note was a try on his debut for Tim Waghorn, a New Zealander currently farming in Hambleden. Duncan Zacks also got on the score sheet again to bring his season total to three while Tom Grenfell crossed for a well deserved try and was awarded man of the match for his overall dynamic performance in the loose and good line-out throwing.

However, the coup de grace was supplied by Olly Vine, who ran 80 metres to score after the Hawks had turned over a rare Bicester attack, and then asked to be removed from the field due to his exertions making him feel unwell.

There was time for Jim Hadfield, on for a 10-minute cameo, to remove another Bicester player with his first foray, which was a perfectly -timed tackle to the rib area.