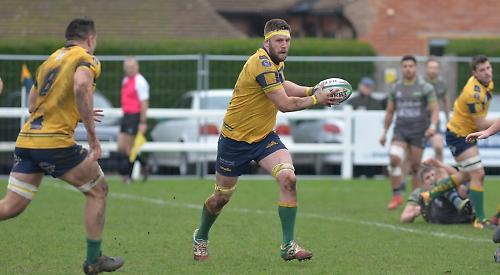 A LACKLUSTRE first half performance ultimately cost Henley Hawks the victory they so craved in Somerset last Saturday.

In recent seasons the fixture at Taunton had been fruitful for the Hawks, winning on the last two occasions. However, this time around it was clear that Taunton were in no mood to play second fiddle.

From the start Taunton dominated possession and the break down as the Hawks were a shadow of their previous few weeks performance.

The home side were running hard lines and busting the Henley defensive line on numerous occasions. Whenever Henley had the ball they seemed to be always on the back foot and searching for answers to the home side’s attack and desire to win the collision areas.

Henley appeared lethargic and uncharacteristically slow to respond to the attacking threat. In addition they were giving away numerous penalties which the home side were able to capitalise on. From one such penalty kicked to the corner, a well-executed catch and drive set up a try which was converted to give the home side the lead after 10 minutes.

At this point Henley were having difficulty clearing their lines and were under constant pressure. In the end some last ditch tackling was relieving some potentially scoring situations. When they kept the ball for phases Henley started to settle into the game and some positive driving play from Cook, Bradley, Emery and Hall relieved some of the pressure.

It was not long before the home side worked another good attacking platform to score wide out. That followed by a long range penalty gave the home side a 15-0 advantage at the break.

In essence this was not an unassailable target given that Henley were now playing with the elements and this proved to be the case as the visitors replied with 17 unanswered points of their own to take a 17-15 lead with 12 minutes remaining.

The first score came from a kick to the corner followed by a perfectly executed catch and drive which saw hooker Emery being driven over. This lifted the Henley spirits as 10 minutes later a carbon copy catch and drive saw Lunnon break away to score close to the post for Bolster to convert. With 10 minutes of the half remaining the ball was moved wide to the left where debutant Norvill was waiting and with no hesitation he beat three defenders to score wide out. Bolster was unable to convert the score.

At this stage Henley should have sealed the game but a poor clearance ensured Taunton had another attacking opportunity to hammer close to the line. The inevitable try followed after a series of pick and drives and the conversion was a formality.

With a five point deficit there was still time for Henley to push for the bonus point try but a forward pass denied them and a late penalty from Taunton also took away the bonus point.

All in all a tremendous second half performance which showed the ability and determination of this Henley team. Unfortunately the first half performance was the difference between the sides and focus now turns to the next couple of weeks with both games against Worthing and Redruth at home.

Some encouraging news was the return of Rory Mason into the front row after a season out with injury and a first game for Will Bordill after concussion received in pre-season.