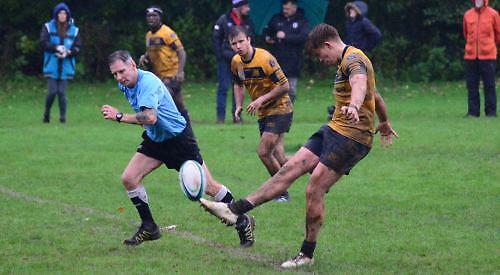 IN A late change of opponents after Old Albanian 2nds pulled out of the fixture, Henley Bulls overcame Maidenhead 2nds at Dry Leas last Saturday in a match played in heavy rain on a heavy pitch.

From the kick off, big tackles from captain Elliot Deacon, Xavier Andre, and Harry Jackson kept Maidenhead at bay.

Early in the game the Bulls were being penalised for being off side, giving Maidenhead the opportunity to get the first points of the afternoon.

A number of good line breaks from George Wood, George Griffiths and Guy Rawsthorn took the game into Maidenhead’s 22 but they could not find the final pass and errors started to occur, giving the visitors the opportunity to clear their lines.

The Bulls line-out was not functioning at 100 per cent as they had lost line-out leader Henry Day to a cut head for 10 minutes. However, the scrum was working well and the introduction of Vultures player Rowan Fuller helped the forwards to put in some hard yards before Griffiths spotted a gap and darted over under the posts.

Straight from the kick off a break by prop George Probyn took the Bulls back in to the Maidenhead half but handling errors and a stern defensive line from Maidenhead kept the score to 7-3 at half time.

The second half kicked off with Maidenhead taking advantage off a few missed tackles as they worked their way up into the Bulls 22 and gained a penalty to kick into the corner. A catch and drive saw them score in the corner and take a 8-7 led.

The momentum had swung towards Maidenhead and they were causing problems for the Bulls defence. Poor discipline kept the Bulls on the back foot and it soon gave the chance for Maidenhead to have a kick at the posts which they took to now lead 11-7.

The Bulls where struggling to get their hands on the ball but were soon lifted by three tackles from Jackson. The lively Elliot McPhunn took a quick penalty to speed up play and disorganise the defence, leading to Day, Probyn and Jake Lovatt to make some hard yards and gain a penalty on to kick into the corner. A catch and drive took the Bulls within meters of the try line s before McPhunn found Huw Evans who stepped the defender and crashed over to give the Bulls a one point lead with 15 minutes to go.

From the restart fullback Archie Van Dijk found some space and made a 40 meter break only for a penalty to be conceded. This gave the chance for Maidenhead to head towards the Bulls line, where they found a determined Bulls defence with Andre and Jackson leading the charge.

Overexcitement led to the Bulls getting the ball off the line too quickly to give a penalty away and a shot at goal, which Maidenhead took to lead 14-12.

With time running out, it was another 40 meter break from Van Dijk that took play up to the Maidenhead 10 meter line before two forward carries and new scrum half Sam Pincott spotted space and box kicked behind. Van Dijk was quickest to react to claim the kick and drew the last man to put Jackson in to score by the posts with four minutes to go and put his side 19-14 ahead. The Bulls held out for the final few minutes to triumph in a hard physical encounte played in good spirits from two committed teams.