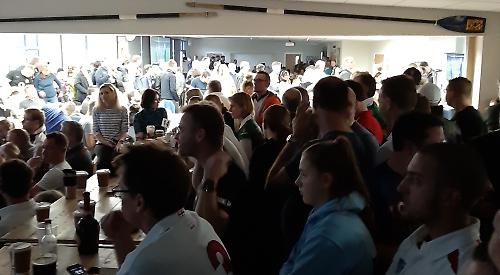 HUNDREDS of fans packed into Henley Rugby Club to watch England take on South Africa in the world cup final in Japan.

The match was shown on two large screens in the clubhouse at Dry Leas, off Marlow Road, which was packed with about 400 supporters, including some South Africans.

There were also members of the club’s various teams, including the Hawks until they left at half time for their own game at Westcliff in Southend.

All the tables and chairs were taken and there were queues for the breakfasts that were being served long before the 9am kick-off.

However, the initial excitement for the England fans, including many children, soon turned to angst as their team went behind and were eventually beaten 32-12 by the Springboks at the International Stadium Yokohama, Kanagawa.

Laurence Morris, a former player who runs a menswear shop in Duke Street, said: “I got there at 8am and the place was packed. There were kids there, families… everyone seemed to be there. Unfortunately, it meant my shop was empty. Everyone was grabbing seats and tables. There were queues for the breakfast bar and the bar was very busy. There was no shortage of people who started on the beers very early.

“It was noisy and you had all the emotions you would expect.

“Henley Rugby Club could not have done a better job and the atmosphere and support was fantastic.”

“Expectations were so high because of the way England had played against the All Blacks in the semi-final but they didn’t turn up, or that’s how it seemed, and at the end there were a lot of very disappointed people. It was a very deflating feeling.”

Teresa Edwards, the club’s finance manager, said there was hardly room to move in the clubhouse before the match and the atmosphere was “electric”.

“There were quite a few South Africans as well so there was really good camaraderie between the two,” she said.

“There weren’t many occasions in the game when the English could raise their voices in excitement because it was a completely different game [from the week before].

“The thing with rugby is that people are just happy. The whole tournament has been wonderful. It’s nice to have some pride in your own country and getting that far and beating New Zealand.”