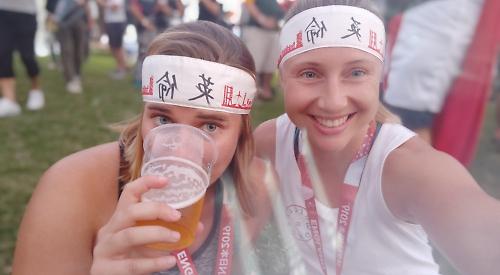 A TEACHER who quit her job to watch England play in the Rugby World Cup says it was a once-in-a-lifetime experience.

Anne Wheeler, 27, spent the entire six weeks of the tournament in Japan after leaving her job at Rupert House School in Bell Street.

She bought a ticket for Saturday’s final, which England lost 32-12 to South Africa, only a few days beforehand.

Miss Wheeler travelled to Japan with her girlfriend Genevieve Moody whom she met at Henley Rugby Club where they both play for the women’s side.

The couple live in Henley but Miss Wheeler is now teaching English in Vietnam and will not return home until May while Miss Moody flew home after the group stages.

Miss Wheeler said: “Rupert House were incredibly supportive. I worked there for six years straight after university and I did my teacher training there.

“All my colleagues, the pupils and their families understand my passion for rugby and that it is an important part of my life.

“I was at the point in my career where I wanted to do something new and teaching abroad has been something I have thought about for a long time.

“Many of my colleagues are very good friends and encouraged me to challenge myself and see the world, as they would have done at my age.

“It was a difficult decision as I have enjoyed a wonderful time living in Henley, with great friends and a fantastic job, but opportunities for a trip across the world don’t come very often and after I found a job to tie into the travel it seemed too good to pass by.

“The tournament was incredible. It was wonderful seeing England and the other teams play great rugby.”

Miss Moody, also 27, who works in management consultancy, could only stay in Japan for four weeks as she had to return to work.

She secured match tickets through the ballot after applying because her brother wanted to go with a group of friends and asked all his family to apply. She ended up getting the maximum amount. Miss Moody said: “I was there for four weeks so I saved my holiday for a year. It really was the adventure of a lifetime.

“It was a great experience and we were completely immersed in Japanese culture. The games themselves were phenomenal. It was incredibly hard to come home.”

In fact, she had only meant to be there for three weeks but her visit was  extended by a week due to Typhoon Hagibis, which wreaked havoc across the country and resulted in the cancellation of three matches.

She explained: “It was quite a sobering experience because there wasn’t much information from the Japanese authorities and we suddenly noticed the supermarkets were out of water and long-life food.

“We ended up being evacuated from our hotel to the top floor because the Tokyo Bay was predicted to burst its banks.”

Miss Wheeler, who has played eight seasons for Henley Hawks Women and made more than 100 appearances, added: “I had already bought a ticket to the quarter finals hoping that England would win the group and I then bought a semi-final ticket through a Facebook Rugby World Cup fan group, where people could swap and sell tickets to other supporters. I bought the final ticket from the official website a few days before the game.

“Despite England losing, I have no regrets about going as I’ll probably never go to a world cup again. Watching the trophy be lifted, being there to applaud England for an amazing tournament and South Africa for their achievement and seeing the players with their families, was a once-in-a-lifetime experience.”