Rosehill side have edge in nine-try derby thriller 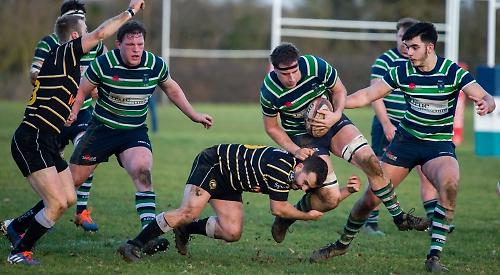 THE Rosehill faithful were treated to a nine-try thriller to open the new decade as a strong second-half comeback from Abbey saw the home side clinch a tight bonus-point win against third-placed Marlow in Southern Counties North.

Toby Staker and Edward House hugely impressed in the forward pack, while Charlie Shackleford led from the front in the backs, kicking 12 of Abbey’s points on the day and offering some fine running lines in attack.

Early indiscipline cost Abbey at the start of the match, allowing Marlow several opportunities to make their mark on the game, which they did quickly after their pacey Harry Yeomans was deftly released to cross in the corner. Fullback Christian Witney could not convert, and it was these small margins all game which allowed Abbey to continue to have a hold on the match.

Although Shackleford snatched back a penalty, it was Marlow who crossed the whitewash again first, James Forsyth taking advantage of lacklustre Abbey defence and tiptoeing his way to the line.

At the restart Abbey seemed to finally get into gear and positive phases of play, combined with good running from Adam Postlethwaite and Conor Slaven brought them to within metres of Marlow’s line, where the home side won a penalty for Marlow’s indiscipline at the breakdown. Sensibly, skipper Will Bevan nodded to the posts and Shackleford duly landed the penalty kick; moments later, a poor kick chase from Abbey saw Marlow capitalise on the chaos and allowed winger Stasio Maltby to grab the away side’s third try.

It was Staker’s timely try on the stroke of half-time which swung the momentum of the game back into Abbey’s hands and set a platform from which they attacked in the second half. Jeremy Knights, having led the team out on the occasion of his 100th cap for Abbey, secured the ball at the line-out and fed Staker, who bulldozed over the line and reduced the deficit between the teams to a converted try. Buoyed by this, Abbey’s defensive effort was superb to keep Marlow at bay and close out the half.

Although Marlow grabbed the first try of the second half, through a clever tap and go, from then on Abbey reached the next gear up and played their best rugby all game in order to secure the bonus point.

Slaven cut another scintillating line, keeping Abbey on the front foot, and although Marlow regained possession soon after, Staker charged down the clearance kick, regathered the ball and released George House to score in the corner. Now hungry to take the lead for the first time all match, Abbey’s defence intensified, led by hooker Jake Leach and fly-half Jon Malivoire, forcing handling errors from Marlow. Another penalty kick was buried by Shackleford in the corner and the resulting line-out led to a series of forward carries, culminating in Edward House joining his brother on the scoresheet.

Moments later skipper Bevan capitalised on a streaking run from number eight Matt Simmons, dummying before winning his side the lead for the first time all match. With Shackleford’s conversion, Abbey were now five points to the good.

The last 10 minutes of the match were not without drama and although Shackleford nudged Abbey to an eight-point lead with another penalty, an injury to prop Adam Postlethwaite forced the hosts to play with 14 men, due to his partner prop Lewis Jones having been forced off with injury earlier in the match. Marlow capitalised on the extra man and scored a converted try to bring the score to 33-32 to the home side. The game hung in the balance and although Marlow opted to take their chances at the posts with two penalty kicks in the last three minutes, neither were successful. Skipper Bevan caught the second kick and exuberantly fired it into touch as Abbey claimed their first important win of 2020, only their third this season, and most importantly widened the gap between them and the relegation zone.