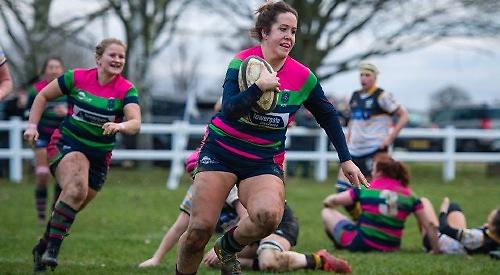 HAT-TRICKS from Alice Denton and Annette Bevan, as well as a maiden try of the season for Meaghan Fowler, saw the Nuns secure their sixth bonus-point win of the season against league newcomers Portsmouth Valkyries, who gave an impressive first-half performance and even snatched the final try of the game.

Abbey got on the front foot almost immediately, with flanker Abi Wall gathering the loose kick-off and the quick hands of inside centre Fern Edgar finding Bevan, who sprinted for the opening score.

However, with both teams only managing to squeeze in one training session ahead of this game this side of New Year, the opening quarter was fraught with ill-discipline and marginal errors from both sides.

If anything, Portsmouth had the hold on the game and it was only Abbey’s heroics which kept them at bay; huge tackles from Annabel Hawkins and Alice Lawrence leading the impressive defence which culminated in two held-up tries for the visitors.

Although Abbey had some good attacks of their own, spearheaded by Denton’s territorial kicking and fine breaks from Hawkins, Joey Fowler and Harri Driver, it was Portsmouth who scored next, taking advantage of some quick penalty decisions to tap and go before crashing over the line. With the conversion kicked well by winger Susan Badger, the Nuns found themselves trailing 7-5.

It was the Nuns who had the final say of the half as prop Jess Potter found Bevan who interlinked well with Denton to grab her brace.

The second half started on a bad note for Portsmouth, whose scrum-half Samantha Groves sustained a knee injury just before the break, forcing replacements to be made.

Unperturbed, Abbey started to get into gear, playing some solid phases of play which saw scrum-half Ellie Rice direct play to each side of the pitch, testing Portsmouth’s defence. Eventually, it was second-row Meaghan Fowler who picked a superb line off Rice to cross for her first try of the season in style.

Abbey Nuns were now in full throttle, and the replacements Claire Stevens, Fi Manning and Sarah Odenbach buoyed the Nuns further. A series of penalties saw Denton bury the ball into touch deep in Portsmouth’s half and she finished off her own work by picking a deft line off Bevan to cross for her first try of the day.

Moments later, Bevan completed her hat-trick after a well-timed run off Hawkins and Denton did so soon after, running in from the half way line.