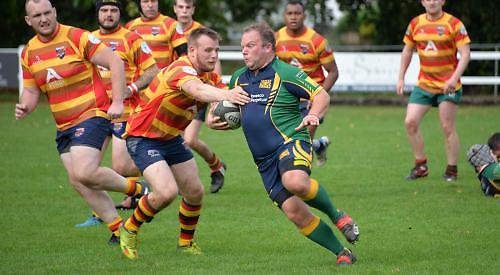 HENLEY VIKINGS came away from a tough game against local rivals Marlow on Saturday with a hard fought victory.

Despite several key players being away or called up to the Bulls, the Vikings were still able to field a good strength squad of 20, including two debutants.

A good-sized crowd gathered to witness the opening exchanges and the Vikings started with the wind and slope against them, and a strong winter sun in their eyes. Both sides had periods of dominance in the opening quarter, but neither was able to convert an opportunity into points.

After 20 minutes Henley were penalised for holding on in the tackle, which was a feature of the game overall. Marlow had two young, quick and talented flankers who dominated much of the loose play by virtue of being first to most breakdowns, and they won at least seven penalties during the game.

Aided by the wind, the penalty was kicked 50 metres to touch just short of the Henley line, and from the resulting line-out, Marlow executed a well organised driving maul to claim the first score of the game, which went unconverted.

The Vikings came back strongly and established a period of pressure in the Marlow half, and number eight Richard Webb thought he had scored after a strong driving play by the pack and effervescent scrum-half Micky Molloy but this was ruled out by the referee.

The injury toll was starting to mount for the Vikings, with influential centre Toby Stevens leaving the field with an eye injury, from which he returned, but then had to retire permanently with a shoulder injury. His temporary replacement, Ali Hughes, then pulled a hamstring during his short time on the field, so a back-line reshuffle was required.

On 38 minutes Henley delivered a strong scrummage just outside the Marlow 22, and after some good handling by several players, debutant fly-half Luke Brewin weaved his way over to score. This went unconverted to leave the sides 5-5 at the break.

The Vikings started the second half strongly as they were playing with the elements, but errors at crucial moments meant that more scores were not forthcoming. After 15 minutes, an increasingly dominant Vikings scrum disrupted a Marlow scrum, and the ball came loose to flanker Ross Gilbert who beat two defenders to score a deserved try which was converted by Molloy.

It now looked as though the Vikings might stretch clear, but the referee started to lose patience with the number of penalties being conceded by Henley in the loose, and both captain Craig Johnston and then Gilbert were given yellow cards, leaving the Vikings briefly down to 13 men.

Marlow were inspired by this turn of events and the Vikings had to defend ferociously to prevent their line being crossed. This was duly achieved, aided by a couple of poor decisions from Marlow when looking dangerous, and Henley returned to full strength with the score unchanged.

However, an injury to backs replacement Harry Wray meant that they were forced to play Ross Gilbert in the backs for the last quarter of the game.

Marlow continued to press the Vikings line, but then came a game-changing moment that if it had been scored by the Hawks themselves would have been a strong contender for try of the season.

Marlow were penalised five metres out from the Hawks line, and whilst most Henley supporters breathed a sigh of relief, the ever alert lock Chris Norton saw the Marlow players with backs turned in disappointment. A quick tapped penalty saw him surge out of the Marlow 22 before he off loaded to Gilbert in support. He took the break up to half way as Marlow frantically scrambled back to cut off the move. He then off loaded to Kiwi fullback and debutant Ryan Nugteren, who beat one opponent and then faced the last Marlow defender. It looked like a classic one-on-one challenge but prop Charlie Chavasse came roaring up on the inside to take the pass and had enough pace to hold off the Marlow defence for the remaining 35 metres to score the game-deciding try. This was an outstanding length of the field try, with only one back involved, started by a lock and finished by a prop.

The stunned Marlow crowd eventually burst into applause, and the conversion was duly kicked, and the score had reached 19-5 in Henley’s favour.

The last 10 minutes saw end-to-end rugby, with Henley pushing for a bonus point try, and Marlow searching for a losing bonus point, but neither side was able to add to their tally before the referee brought the game to an end.

Luke Rosier, who put in an outstanding defensive game, as well as being involved in many of the best Henley attacking moves, was named the Vikings man-of-the-match.

This was the first of four away games in a row for the Vikings, and the squad are determined to maintain their good form as they challenge to finish second in the league.