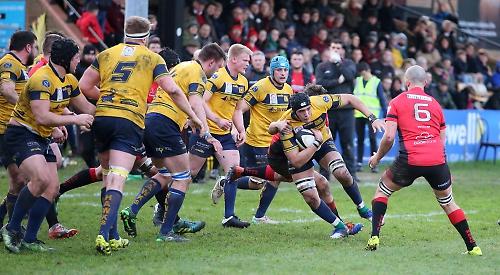 HENLEY HAWKS returned from Dorset with a bonus point win but were made to work hard for the victory which was in doubt until the last few minutes. Bournemouth, who sat at the foot of the league, belied their lowly position as they challenged and caused problems for the visitors all afternoon.

Henley’s cause was not helped by a catalogue of errors as they struggled to come to terms with a difficult pitch and a lively home side who fought and battled their way all afternoon.

Bournemouth took a healthy 10 point lead as an early penalty was successfully kicked followed by an interception try after the Henley backs failed to hold on to a training ground move and the ball popped up into the centres hands for a clear run in to the line after 15 minutes.

Henley were quick to respond and their trademark high octane game for once worked as they stretched the home side who eventually conceded multiple penalties. From one such line-out, taken well by Hyde, the ball was driven effectively towards the Bournemouth line and a clear collapsed maul left the referee no alternative but to award a penalty try.

At this point it looked as if Henley were going to push forward and take control but once again a series of unforced errors allowed the hosts to stay in contact.

The Henley scrum was enjoying a dominant day as the front row of Primett, Stobbs and Mason dominated their opposite numbers and from one such attacking scrum the Henley eight drove forward for Fenley to dot down close to the posts to make the conversion for Bolster reasonably straightforward.

With 10 minutes remaining of the first half Henley once again found it difficult to get a foothold in the game as Bournemouth ended the half pressurising the visitors’ line. However, a line-out won close to the Henley line enabled the pressure to be relieved and Fenley was able to clear the ball to see out an error-strewn first half.

The second half started as a mirror of the first as Henley once again found any sort of continuity hard to come by and Bournemouth once again took the lead as Henley succumbed to good home side pressure. Eventually the hosts forced their way over to regain the lead.

Henley now enjoyed their best passage of play as they dominated proceedings for the next 20 minutes. This brought two tries, one of which was converted by Ben Bolster. A telling break by David Hyde and a trade mark off load saw Ewan Fenley put into space. The young scrum half used all his strength and pace to run in from 20 minutes and take Henley once more into the lead.

Once again Henley attacked well and some smart inter play and juggling by Marcus Lowe and George Wood saw Henley make ground on the right, then a perfectly timed pass by Sam Lunnon saw Reuben Norville run in from 15 metres to take Henley nine points clear. At this stage Henley should have put the game beyond doubt but instead conceded a simple penalty which Bournemouth easily converted to reduce the lead to only six points.

There then followed some nervous exchanges as Henley were once again penalised strangely for a scrummage offence whilst driving the opposition off the ball. Fortunately the visitors were able to turn over the threats and finished strongly hammering away at the Bournemouth line. In the end they were content to see out the game and kick the final play well into touch to bring to a close a frustrating afternoon but with a very satisfactory result.