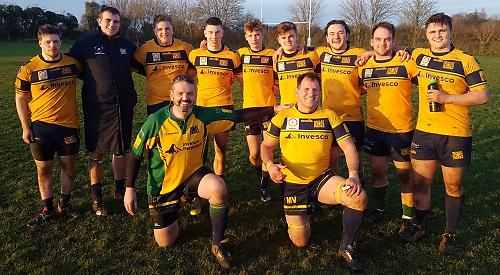 HENLEY VIKINGS climbed to third place in their BBO division after an emphatic 71-19 victory at Witney 3rds last Saturday.

A successful day was made even more remarkable because of the nature of the side that the Vikings eventually fielded. The game was in doubt as a competitive league fixture because of front-row availability problems, but the game was saved by veteran Vultures Chris Fisher and Simon Matthews answering last-minute calls so the game could go ahead. They were joined in the squad by the Vikings player-coach Mark Venner, making the combined age of the trio 155. Mark and Chris were accompanied in the squad by their respective sons Ben and Ali.

More remarkable was the fact that nine of the 20-man Vikings squad had all been coached by Mark and Chris at U6 level 13 years ago.

The game was something of a procession, particularly in the first half. The Vikings’ overall pace and supply of good set piece ball led to seven tries of which four were converted. This included a hat-trick for Ben Venner, playing at fullback, and it took Witney a whole half to realise that kicking the ball long anywhere near him just gave him an opportunity to use his electric pace and sidestep. The other tries were scored by fellow young backs Adam Porter, Henry Heath, and hooker Tom Grenfell, recently returned from injury, who had a fine all-round game. All these players seem destined for rugby at a higher level and several of them will feature for the Bulls throughout the rest of the season.

The older players held their end up well, and Richard Webb, the squad’s effervescent veteran South African, scored a remarkable solo try from 50 yards out down the right wing as the Vikings led 43-0 at half-time.

Witney put up more resistance after half-time, abandoning the kicking game and resorting to close driving play far more suited to their large but ageing pack, which led to their first score after only three minutes. The Vikings quickly responded with a good try from flanker Callum Brady, who had returned to the field after a swinging arm had caught him in the face.

The sides exchanged further tries, with Adam Porter bagging his second and Ben Venner his fourth of the game. However, the introduction of father Mark from the bench saw some combative and uncompromising play up front, which eventually led to several skirmishes.

After the third huge melee, the game claimed down for the last few minutes, and there was time for returning flanker Charlie Dominy, playing his first full game of the season, to score the game’s final try, to being the final score to 71 points to 19.

Three good wins in a row to start 2020, all away from home, bode well for the rest of the season. The Vikings have a week off, before another away game to play Risborough before getting back to Dry Leas on February 15 to face High Wycombe.