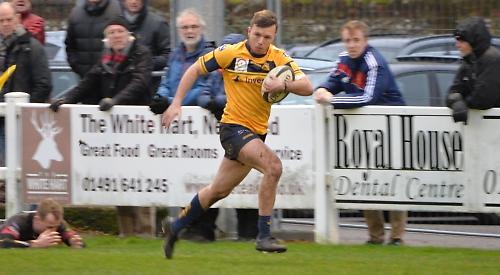 HENLEY HAWKS returned from the south coast on Saturday with a well-earned bonus point win against a Worthing side that had improved dramatically since the encounter back in October. In the end Henley produced some excellent rugby at times without really hitting peak form.

Elsewhere Taunton Titans beat league leaders Tonbridge Juddians, a result which moved Henley into top spot at the end of the day.

The game started brightly for the Hawks as some early Worthing pressure was repelled and a telling break from Will Janes, playing his first game of the season, was well supported by Ewan Fenley. In the ensuing attacking phases the ever present David Hyde crashed over for one of his trademark tries. The conversion from Ben Bolster was successful and Henley were up and running.

Almost immediately Henley were making several line breaks yet the final phase or pass wasn’t quite sticking and Worthing were able to clear their lines.

However, all this pressure told as multiple penalties were conceded by the hosts and this allowed Henley to kick into the corner and launch a driving maul try for Tom Emery which was again converted by Bolster.

At this stage it looked as if Henley would really kick on and maybe secure the bonus point before half-time. In the end they just simmered for the rest of the half and a rare foray into the Henley 22 saw a clever chip kick from the fly half Matt McLean bounce kindly in the Henley goal area for centre Kieran Leeming to score, the conversion was a formality. Henley had one further chance to score just before half-time but miscommunication allowed Worthing to clear their lines safely into touch.

It was crucial that Henley got on the score board first in the second period as so often this season they came out of the blocks at full tilt. Some penetrative runs from Samir Kharbouch and Xavier Andre in the midfield were opening up gaps in the defence. This created attacking opportunities and from one such dominant scrum Sam Lunnon crashed over for his 13th try of the season. Once again Bolster was on hand to increase the score to 21-7.

Almost immediately from the kick-off Henley were awarded a penalty and a tap and go from Fenley produced the try of the afternoon as deft hands from Marcus Lowe sent George Griffiths in for the bonus point score. This time Bolster was off target.

Soon after Henley wrapped the game up as Rory Mason crashed over from a series of drives to make the score 33-7. Henley were also able to use their bench to full effect with George Probyn making his debut at loose head and Jimmy Wright gaining some valuable experience on the flank. The game then ebbed and flowed from one end of the field to the other but a resolute Henley defence was not going to allow the normally high scoring Worthing side over. They were then able to close out the game effectively.