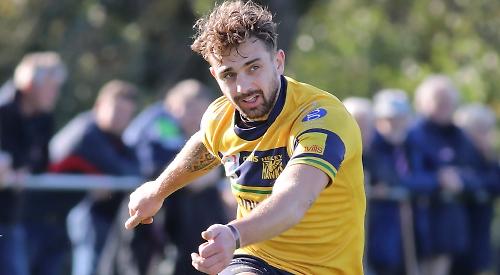 HENLEY HAWKS returned from Cornwall empty-handed and relinquished their top spot as they were overhauled by an in-form Redruth side who are unbeaten at home this season and who extended their winning run to nine matches.

Henley got off to the best possible start as they pounded the line and Ewan Fenley cleverly spotted a hole in the defence to dive over for the opening score which went unconverted.

However, the home side were back in their stride as they hounded Henley at ruck time and converted a penalty in front of the posts. There then followed a period of pressure on the Henley line and after a couple of defensive errors a pick and move saw the home side prop dive over for a converted try to take the score to 10-5 as the home side were starting to win the forward battle.

Henley were having a tough time in the scrum and this led to a string of penalties which relieved the Redruth line every time Henley got close. However, Henley were building good attacking positions and were unlucky on two occasions as David Hyde and Marcus Lowe broke good lines. This led to a simple penalty for Ben Bolster to convert and the deficit was cut.

Redruth looked dangerous as they built close quarter pick and drive phases which sapped the visitors’ defensive line. This eventually led to another try close to the posts to take the score out to 17-8 after some relentless forward play.

Henley were not to be outdone and eventually built good phases and a line-out 10 metres out saw a well-executed driving maul and eventually Tom Emery touched down. Henley were now only two points adrift and it was game on again but unfortunately a defensive lapse allowed Redruth to break through and score right on the stroke of half-time to take a comfortable nine-point lead at the break.

It was important that Henley got on to the scoresheet early at the start of the second period. However, Redruth had other ideas and once again pressurised the Henley defence, but this time the defence held firm and a loose pass saw a counter-attack initiated by Xavier Andre who flung a long pass to Reuben Norville. The winger showed real pace to outstrip the covering defence and score wide out, Ben Bolster converted well and Henley were now only two points adrift.

At this stage with three tries in the bag Henley should have pressed on and forced the game. In the end two further penalties in front of the Henley posts enabled Redruth to ease pressure on themselves and secure an eight-point lead.

The visitors then had a period of extended pressure on the home side line and with Redruth conceding multiple penalties it looked as if it would be only time before they secured a bonus point score. However, an eventual error by Henley brought the large crowd to its feet and the line was relieved. This seemed to sap Henley’s energy and Redruth went to the other end of the field to secure their own bonus point try at the death and to earn a well-deserved victory.

All in all a disappointing afternoon when some significant momentum swings went away from Henley. This has set up a mouth-watering encounter tomorrow (Saturday) with top of the table Tonbridge Juddians.