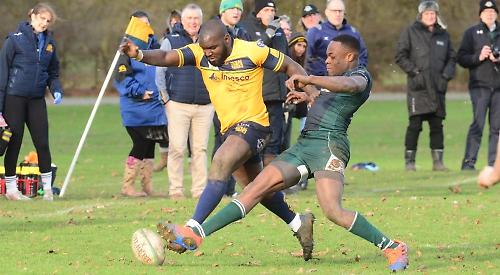 HENLEY BULLS were back in Zoo Shield action against Ealing U23s last Saturday in a match that, due to several late withdrawals due to illness and injury, meant the hosts could only field 13 players.

The Bulls started the game with confidence and were soon a score up following a kick from Elliot McPhunn and the chase from Loick Bazzi who was able to force a turnover which gave prop Elliot Deacon the chance to hit a good line to score from 20 metres out.

From the restart it was deja vu as a clearing kick, a chase, a turnover close to the line, allowed the other prop Henry Penrose to five over to make it 14-0 after five minutes.

A knock on from the restart gave Ealing their first bit of possession and territory and they were able to go through the phases to test the 13 men.

The Bulls were showing good heart and making tackles, led by the two makeshift forwards, Peter Kerins and Adam Porter. The Bulls were being well disciplined in not committing to the rucks.

The pressure did eventually tell and Ealing were able to score two quick tries. The Bulls were then able to have possession for a while as Guy Rawsthorn and the returning Alex Burrage were given ball on the front foot from the hard working Jimmy Wright and Andrew Stobbs, and they were able to pass out wide to give Bazzi a chance to stretch his legs. Unfortunately two missed tackles in the final 10 minutes of the half meant the score was 27-14 to Ealing.

The Bulls kicked off the second half and after some string running from Isa Mohammed, Ross Lewis, now at scrum half, brought the players in to build some pressure on the Ealing line. Quick thinking from Lewis saw him use his experience to dart over.

Buoyed by the score, the Bulls were full of confidence and good linking play from Porter, who made a break and found Kerins in support, led to a turnover to Ealing. The visitors were then able to go through multiple phases to apply the pressure to score to take it to a two-score game again.

The Bulls hit back as Rawsthorn made a break to take play into the Ealing 22, Tom Grenfell then took play up to the line, where some quick thinking from Lewis saw him score his second, and a good conversion from Kerins took the Bulls within four points of the lead.

The Bulls came straight back, again Rawsthorn spotting the gap and making the break. Wright was then on hand to make the next break, only to be held too short. However, a mistake allowed the ball to be turned over and Ealing cleared to finish the game.