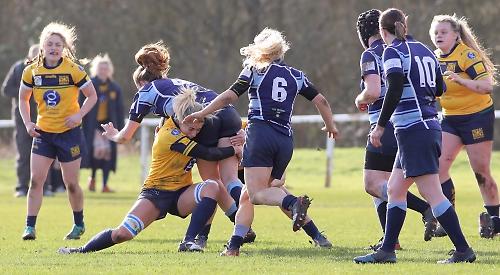 VISITING side Henley Hawks were glad of their final fixture of the season being played on Saturday as they missed the wind and rain of Storm Ciara in their final Championship South match of the season at Swindon side Supermarine.

Going into the fixture Henley had already secured their spot in the division next season having previously won their previous match.

Henley got off to a poor start as they spent much of the first 20 minutes in their own half, but managed to keep Supermarine from getting over the line.

Momentum changed leading up to half-time, with an attempt at goal from Henley off a penalty inside the 22. Mia McCreash missed this first opportunity at goal but she made up for it almost immediately with a second penalty which sailed through the posts. Henley came into their own after that and played an expansive game, kicking to the corners, which proved effective in gaining territory which led to their first try. McCreash made a good line break, beating four defenders to get over the line. She then converted her own try.

Three minutes before half-time, Henley’s fullback slipped making a covering tackle, and managed to trip over the attacking Supermarine player, which led to her being sin binned for 10 minutes.

The visitors went into the second half with 14 players, still feeling momentum was on their side, but after a series of penalties, for being offside, Henley were forced back into their own 22.

Supermarine’s narrow game plan played into their hands and they managed after several phases to get over the try line.

After this score, most of the second half was played in Henley’s half, and due to another yellow card, and a second yellow for Henley’s fullback, the visitors were reduced to 13 players.

Supermarine managed to utilise this string of penalties, which gave them territory, as well as their overlap to kick one through the posts and score two unconverted tries. Henley defended solidly throughout.