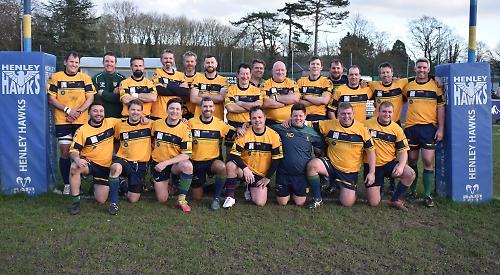 ON a perfect day for rugby last Saturday Henley Vultures’ match against Barnes Harrodians in the Surrey Vets League saw a game of ebb and flow. Rising to the occasion of playing on the main Dry Leas pitch, both teams fielded a full complement with substitutes to spare.

Receiving the ball from the Barnes kick-off saw Henley provide positive and open play and looked to be in full control, with good ball from the pack being quickly fed by scrum half, Michael Molloy, to the backs.

Barnes struggled to defend this early onslaught and were caught lying over the ball in the ruck, right in front of their posts. The consequent penalty gave fly-half Andy Noyce a simple shot at goal to notch up three points for Henley after six minutes.

Barnes were wrong-footed by this early dominance by Henley and conceded several penalties in a row. After a further penalty for a deliberate knock-on by Barnes, Henley’s replacement centre Chris Darke, following the early injury to Mike Watts, opened up the Barnes line. With an offload to Will Woodward, making a welcome return to Henley after some years, prop forward Jim Hadfield forged over to score Henley’s first try. Noyce’s conversion took Henley ahead to 10 points.

At this point Barnes were able to wrest back some control of the game and appeared the better drilled side but were held back by good defence and by Henley’s strong pack with a particularly solid front row, including Simon Matthews and Dan Foley in addition to the try scorer Hadfield.

Barnes’s perseverance rewarded them with a converted try as half time approached which saw Henley leading 11-7 at the break.

Henley started the second half with the same vigour as the first and Andy Noyce quickly went over the Barnes line to score and then convert his own try to put Henley 17-7 ahead. At this point the game flowed back in Barnes’s favour and after a period where Henley seemed to lack shape in their defence, Barnes scored again but failed to convert the kick at 17-12. Both sides then upped their effort which was marked by a fine Henley break by replacement scrumhalf Simon Shaw, with offloads to Matt Payne and then to newcomer Ali Hughes, who was to be brought down short of Barnes’s line.

As the forwards battled to keep the ball, Henley’s Matt Payne received a yellow card for a high tackle, leaving Henley without one of their strongest ball carriers.

With only 14 men on the pitch, Henley were able to hang on for victory.