Hawks’ title aspirations back on track following away win 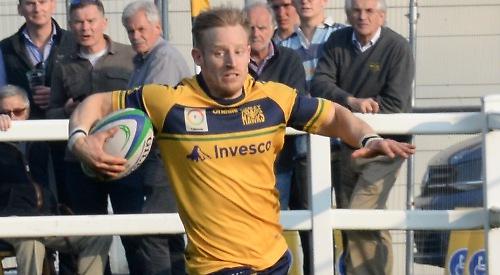 HENLEY HAWKS got back to winning ways with victory at Old Albanian last Saturday to close the gap to the top of the table to just one point.

This was an important win for Henley as they strive to retain their position in the top three of National 2 South. This was a close fought affair but Henley’s extra inventiveness and a desire to attack won the day.

The early exchanges were physical and full of energy. Henley were looking to penetrate at the edges and this paid dividends early on as the hosts struggled with the pace of attack. However, the hosts were quick off the defensive line and caught Henley behind the gain line on a number of occasions.

Old Albanian kicked an early penalty to take a slender lead. The game settled into a ding-dong battle as both sides struggled to build any meaningful close quarter attacks. Henley had the upper hand at the line-out where David Hyde was at his best disrupting opposition ball and taking everything cleanly at the front.

As Henley pressurised towards the end of the first half the hosts were guilty of conceding numerous penalties and Ben Bolster kicked neatly into the corner. The resulting line-out saw a trademark driving maul which was well controlled with hooker Tom Emery eventually touching down for the vital score.

With only a few minutes left on the clock before half-time Henley were guilty of conceding a strange penalty for adjusting their line of running and the hosts’ scrum half brought first half proceedings to a conclusion with a well struck penalty. With a narrow half-time lead of just a point it was all to play for in the second half.

The second half started with Henley playing into a stiff breeze but this seemed to suit their game as they were able to build some promising attacking positions. Bolster was probing well at fly half and he was well served from Elliot McPhun making his first start at scrum half. The forwards started to combine well and some slick offloading led to a try in the corner from Jack Robinson. The conversion fell just short and Henley now had a four point lead.

With a rare attack into the Henley half the hosts were able to pull back another penalty to narrow the lead once more. Indeed this was a statement that the hosts were not confident of winning their line-out ball. Henley re-established themselves and were held just short of the line on several occasions. Eventually they chose to convert a penalty to take the score to 13-9.

Once more Henley replied with some dominant driving forward play. Elliot McPhun put a clever looped pass to another debutant Will Panday who took the attack on further and a couple of offloads later and George Primett was under the posts, with the conversion a formality. With a score of 20-9 Henley tried to push for the vital bonus point that would have taken them to the top of the league again.

However, the hosts had other thoughts as they pressurised the Henley defence and scored a converted try with the last play of the game.

All in all a victory that was vital to Henley’s ambitions. With all the top four clubs having played each other the focus each week now is on maintaining a winning formula and hopefully picking up as many bonus points as possible along the way.