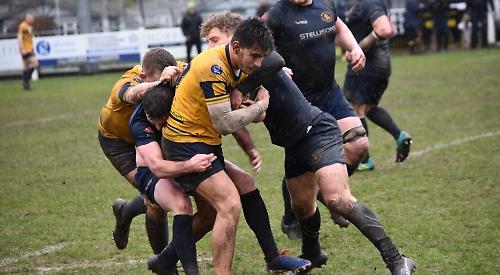 DIRECTOR of rugby Nigel Dudding says maintaining consistency is going to be key if Henley Hawks are going to gain promotion this season.

Last weekend’s fixture at Dry Leas was one of just four that survived the wind and heavy rain brought in by Storm Dennis. The Hawks went top after picking up five points with a bonus point win while Tonbridge Juddians had to settle for four points from their narrow win against Old Albanian. Taunton Titans and Redruth, the teams now sitting in third and fourth place in the table, both saw their fixtures against Esher and Leicester Lions respectively postponed.

Looking ahead to the final two months of the campaign, Dudding said: “The key to the run in is to maintain consistency and be totally focused on our own job and prepare well each week.

“With all of the top four having played each other the focus is clearly on the other teams in the league. Every game is tough and a bit like a cup final, it’s more like knock-out rugby now.”

Dudding added that improved weather conditions would help the Hawks’ cause with their running game as well as his side avoiding injuries. Dudding said: “Dryer pitches would certainly be a bonus this season. I don’t think I’ve known a season where the weekend weather has been consistently poor. The edge will come from careful planning and application, these are the controllables and of course to stay injury free. We have strengthened the squad recently and so hopefully we will stay in good shape.

“Injuries are always a limiting factor but it also depends on the size of the squad, we’ve had some notable performances in the last couple of weeks from young players keen to make their mark particularly Will Panday and Elliot McPhun, so this is a good position from which to attack the remaining games.

“Ben Bolster is still waiting further assessment while George Wood should be available for selection in the next match against Clifton.”

Dudding also welcomed the break in fixtures this weekend – and two more before the end of the season – adding: “This break has come at a timely moment for us to recharge the batteries and take a welcome break. Thirty games in a season is too many for semi-pro rugby players.

“Knocks and bruises take time to heal and that’s why it was important to get last week’s game out of the way to be able to prepare fully for the coming weeks. Momentum is great but player welfare is more important.”

Having gone back to the top of the table, Dudding is hopeful that, with the backing of the Dry Leas supporters, the Hawks can go on and gain promotion. Dudding said: “We have a side capable of winning this league but there a still twists and turns to come in the remaining weeks. There is a growing excitement at the club with the mayor coming into the changing rooms at the end of the game to wish us well.

“It would be great if we had even more supporters at home to give us the edge. I don’t think anyone can predict the outcome, at this stage it’s too close to call. All I can say is that we’re certainly up for the challenge.

“Our aim when entering a competition is to win it, however if we have to do it the hard way then thats fine, a home play-off would clearly be the desired outcome here.”

The top placed sides in National Division 2 South and North both gain promotion to National Division 1. The runners-up in both divisions will contest a one-off play-off game with the winners taking the third promotion place. The runner-up side with the best home record will have a home advantage for the match that will be played on Saturday, May 2.