Hawks get campaign off to a winning start 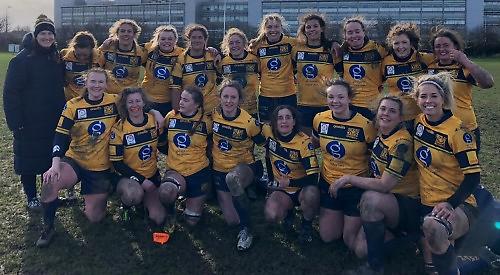 WOMEN’S Championship Plate holders Henley Hawks got the defence of their title off to a winning start as they ran out 50-7 winners at Newcastle-based side Novocastrians last Saturday in a match played out in blistering windy conditions.

Ten minutes into the game the Hawks suffered a blow with Megan Davies putting her body on the line and coming off worse for wear and fracturing her wrist.

Henley rallied and after 20 minutes in the home side’s 22, Nina Webb put the first score in for the Hawks which Rachel Humphreys converted.

The forward pack, working hard at the breakdowns to ensure clean ball to Humphreys, again made good line break to give Jennie Green-Hope in the next phase a clear run to the try line evading the home defence to put the Hawks 12-0 up.

Going into half-time Webb put the ball over the try line for Humphreys in for a second converted try to put Hawks 19-0 ahead.

In the second half neither the team nor the howling weather let up as Henley put pressure on to the home side’s attacking phase forcing the knock-on. The strong scrum of the Hawks gave Lini Kaufana a leading platform to breach the Novocastrians defence to put the ball down for the fourth try which Humphreys converted.

The forwards once again set the platform phase after phase securing against the heavier pack, giving the backs time to exploit the space for Webb to score her third try with ease, once again converted by Humphrey as the visitors led 33-0.

Katie Philips came off the bench and made an impact, breaking the gain line with Kanfana in support. Unselfishly Phillips offloaded the ball to Kanfana for her second try of the game which was not converted.

The home side were finally rewarded for their good effort as they scored a converted try to make it 38-7.

This wasn’t going to dent the confidence and morale of the Hawks. From the restart Laura Wilkie played the advantage of the Novocastrians’ knock-on picked up the ball and ran in straight under the sticks. Mia McCreesh kicked the conversion.

Mia then made a good line break dodging the defence of the Novocastrians to score before converting her try to wrap up the scoring.