Abbey maintain winning habit as they wrap up title 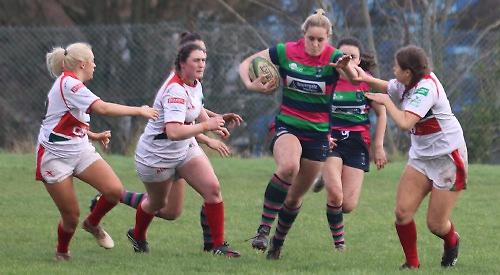 WITH two games to go of the league season, Abbey Nuns returned from Plymouth with the Championship South West Two title in hand along with a bonus-point 37-0 win.

This was the furthest the Nuns have ever travelled for a fixture, and the 400-mile round trip brought a scintillating performance with seven tries from six different scorers in order to seal the title.

Outstanding individual performances around the park from Meaghan Fowler, Annabel Hawkins and Alice Denton kept the Nuns on the front foot all game while strong team defence thwarted any opposition attack.

The start of the game tested the Nuns’ patience, with a strong wind working in the home side’s favour, allowing them to kick well for territory.

Plymouth defended well, bringing a strong game to the breakdown and good cover tackles on the wings. However, the Nuns kept probing their defensive line, which eventually broke when prop Jess Potter set up her fellow front row Fi Manning to cut a line across the whitewash. Moments later, flanker Abi Wall, who had offered some good running lines in the opening quarter, picked a sweet line off fly-half Annette Bevan to tiptoe in under the posts.

Although the Nuns were playing into the wind for the opening half, scrum half Rice and centre Denton kicked well for territory, which winger Pippa Robinson contested well, winning several balls from good kick chases.

The Nuns’ offloading game was superb and strong carries from Claire Stevens, Harri Driver and Joey Fowler allowed them a good platform to release Denton for the third try.

Half-time allowed head coach Lewis Jones to ring the changes and Rosa Erdogan and Hannah Bosher took to the pitch, maintaining the power in the scrum which had been a stronghold all game.

Rice encouraged her forwards to press for the line and both Joey Fowler and Stevens were unlucky not to score. Eventually, the ball worked its way out to the backs and Bevan struck a wide, flat pass to winger Jess Williams, who powered her way to the line.

With one more try for the bonus point, the Nuns were in full throttle. The strong wind had played havoc with conversion attempts, so at 20-0 up, the team were hungry for more tries. A penalty was won deep in the visitors’ 22 and Rice tapped quickly, delivering the ball to Potter who crashed over for the bonus point. Eager to add to the tally, Bosher also enjoyed dotting down soon after, her maiden first team try in Nuns’ colours and Denton rounded off proceedings after Bevan chased down her kick, regathered the ball and popped it to Denton to run in over the line, which Hawkins converted to finish the game.