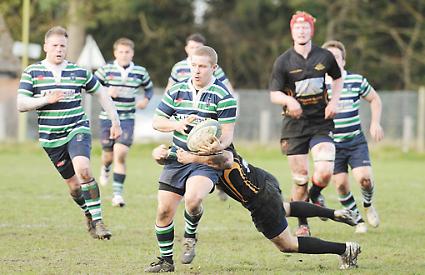 ABBEY’S hard work and good scrummaging was not enough to stop the fluent rugby of Aylesbury grabbing six tries to go second in the Southern Counties North Division.

Head coach Russell Bolton selected his heaviest available front row — Rolland, Emery and Mollett — to match Aylesbury, which worked well, with the added bonus that when Mark Toland replaced Rolland at half-time, Toland was fired up to showcase what he could do.

Elsewhere, the familiar problem of fielding a regular pairing of half backs was tackled by the reliable Nathan Tovey, scrum half, and Dan Love, outside half.

Flanker Ed House, one of several brothers who learnt their game in the youth sides at Abbey, made his debut appearance for the seniors when he came on in the second half to replace Fungai Mutepfa.