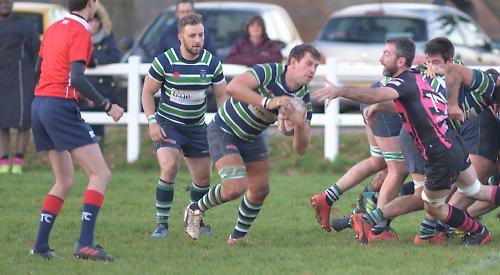 A LOSING bonus point was the very least Abbey deserved after a fine team effort at league leaders Witney last Saturday. The visitors led for most of the first half and scrummaged superbly throughout, and at no time did the game resemble a contest between sides at opposite ends of the table.

The elements were against Abbey in the first half, but Witney occasionally found the wind was too powerful when they kicked towards the visitors’ line.

In the early stages winger Max Boucher gathered and touched down over his own line to foil an attack, while centre Callum Aungier wisely kept his dropout kick low when kicking from his 22. Witney threatened early on through centres Callum Godfrey and Matt Clarke, but after the home side conceded a penalty Abbey began to look impressive.

Second row Jeremy Knights won a line-out and centre Brad Thomas, prop Conor Slaven and number eight Mike Beckly all handled as play reached the home 22. Another drive from Slaven resulted in an Abbey scrum, and the visitors’ eight immediately looked strong in the set piece. Beckly picked up from the base and broke to the right. He fed Jones, who was stopped 10 metres from the line, but the forwards kept the drive going. Eventually Beckly broke again and crossed for a try to the right of the posts. Thomas saw his conversion attempt held up by the wind.

Beckly caught Witney’s restart kick, and skipper Will Bevan sent a high ball into the home half. Abbey conceded a penalty, and Witney looked dangerous as they worked play back to the visitors’ 22. But strong defence under pressure stopped a Witney drive for the line, and a good kick from Aungier cleared for Abbey. Beckly broke from a scrum and made five metres, and when Witney were awarded the next scrum Abbey’s forwards put so much pressure on the home pack that Bevan was able to rob his opposite number Josh Croft as the ball came out.

Another Abbey scrum saw Beckly controlling the ball skilfully before once again gaining ground. Yet another impressive scrum followed with Abbey applying huge pressure on the home put in. Beckly’s next run was supported by prop Adam Postlethwaite and winger Darren Hunter, but after further good progress by Aungier and Boucher a penalty was conceded.

With 25 minutes of the first half played, Witney took the unusual step of sending on all three replacements in an effort to inject some life into the home team’s performance. A forward pass spoiled Witney’s next incursion into Abbey’s 22, and after this outside half Jon Malivoire ran well before fullback Callum House found touch with a good kick.

After this Abbey enjoyed a real purple patch, retaining possession well and driving ever closer to the home line.

On the brink of half-time, excellent rucking from Ed House gained possession for Abbey just inside the home half, but a penalty was conceded and Witney elected to tap and go. A series of phases followed, with the home side getting closer and closer to the Abbey line until, in the final play of the half Clarke’s clever pass gave Godfrey a clear run to the line. He touched down under the posts, Clarke converted. Aungier returned to the field at the start of the second half, with Boucher coming off, and Abbey began brightly. An interception from Thomas started a move involving Bevan, Jones and Malivoire, and after Witney were penalised Aungier made great use of the wind to find a good long touch. George House took the ball superbly at the back of the line-out and after a good maul Beckly, Sutherland and Knights handled as Abbey progressed to the home 22.

Hunter was the victim of a head-high tackle which saw Godfrey sent to the sin bin, and Aungier elected to kick for goal from 38 metres but the ball drifted wide.

Sutherland broke clear, and a great run from Thomas almost gave Knights a clear run to the line. Jones and Malivoire continued the move, but a knock on ended the attack. At this point, Boucher returned to the field as Malivoire was injured.

More good rucking from Ed House inside the home 22 resulted in Witney conceding a penalty in front of their posts. Thomas took over the kicking duties and made no mistake, putting Abbey back ahead by a point.

A good restart kick from Witney put the home side back of the attack, and the forwards drove all the way to the line, only for Abbey’s defence to hold them up when a try seemed likely. Sadly, just after this Beckly was injured and had to leave the field, to be replaced by Ollie Shore. Godfrey’s period in the bin ended at the same time, and just a minute later Witney were back in front when winger Rhys Morgan set off on a curving run towards the right. He scythed through three weak tackles and burst clear to score a fine individual try, and Clarke added to Abbey’s misery by cleverly using the wind to drift his conversion between the posts.