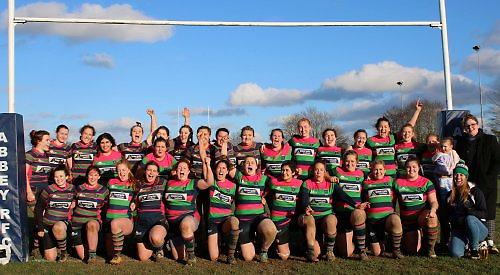 HAVING secured the league title last week in Plymouth, Abbey Nuns marched closer to an unbeaten Championship Division 2 South season in style, with a 47-14 home win against local rivals Newbury.

With Abbey Nuns 2nds also enjoying a much-improved performance at the same time against High Wycombe, which finished 20-26 to the visitors, the Nuns’ flagship team pulled out all the stops to ensure their home supporters had much to roar about on the sideline.

Skipper Annette Bevan, playing her 50th league game for the Nuns, caught Devon Holt’s restart ball from the off and spearheaded the attack up the pitch. Strong carries from the formidable centre partnership of Annabel Hawkins and Alice Denton set the tone for the afternoon as the Nuns played the weather conditions well, kicking to the corners of the pitch.

Flanker Abi Wall was once again superb in the line-out, winning ball in the air against the head which allowed the Nuns’ backs to run riot with Bevan and Denton enjoying two tries a piece in the first half, with Denton successful with all conversions.

Newbury were dogged at the breakdown and strong carries from their forwards Chloe Hunt, Hannah Ward and Carrie Smith kept Abbey honest. A few penalty infringements saw Newbury kick for touch, hungry for points, but the Nuns’ defensive effort was some of the best displayed all season: huge hits from Fi Manning, Ellie Rice and Alice Lawrence entertained the lively home crowd and buoyed the rest of the team. Eventually, Newbury broke through with Becky Wilson touching down.

It was the Nuns who had the final say of the half as an excellent kick chase spearheaded by Meaghan Fowler resulted in an Abbey scrum. Number eight Joey Fowler made a good run off the back of it, finding Jess Williams, playing out of position at fullback, who finished the move off well by crossing in the corner.

With the bonus point won even before the second half had begun, Lewis Jones rang the changes to bring replacements Hannah Bosher, Fern Edgar and Rosa Erdogan into the fray. After good phases of play up the pitch, the latter was unlucky not to score her maiden try for Abbey, which was deemed to be held up. The resulting scrum set a platform for Abbey’s back line to execute a move off the training pitch; a clever offload from Denton to winger Hayley Matthews saw her run a hard line towards the whitewash before allowing Bevan to complete her hat-trick.

Although the Nuns were now playing into the wind, front rowers Harri Driver and Jess Potter ensured the team were still on the front foot with good carries. When their counterpart Claire Stevens rejoined the field, the Nuns’ scrum continued to be a stronghold of the game and was used tactically to combat the strong headwind.

The dying moments of the game were not without drama as Williams was awarded a straight red card for what was deemed contact to Newbury fullback Lizzie Harris’s head in a tackle and moments later, Matthews saw yellow for repeated team infringements. Finishing the match with only 13 players on the pitch, Rice and Hawkins released Bevan for a long arcing run down the pitch to score and complete the Nuns’ tally for the day. Credit to Newbury who showed their tenacity and team spirit until the end with Emma Swinton snatching a try in the final play which Hunt converted to bring the final score to 47-14. Speaking after the game, Abbey head coach Lewis Jones said: “I’m really pleased and proud of the whole squad for their efforts this season. They have worked so hard both on and off the pitch; they are a credit to the club and the club should be extremely proud of them too.”