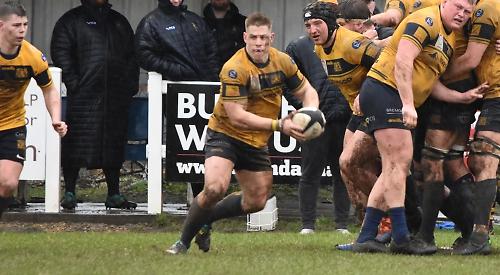 With Storm Jorge bringing huge amounts of rain and high winds the Clifton pitch was deemed to be unplayable and the fixture switched to Dings Crusaders’ artificial surface with an early evening kick off.

Clifton were clearly determined not to allow Henley to play and were hungry for the ball all match. This, coupled with an excellent defensive set ensured that Henley’s attacking opportunities were at a premium.

The hosts made their intentions clear as they ran the first free kick with pace and caught Henley napping to score in the corner, although kicking into a strong wind across the pitch made the conversion difficult.

As hard as they tried Henley were unable to break a resolute defence and handling errors started to creep in and this seemed to rock and unsettle the visitors.

Henley were able to create an attacking opportunity after 10 minutes when an attacking line-out was won but the resulting maul was poorly executed and the ball spilt and Clifton were able to clear their lines with ease. With the strong wind blowing across the pitch handling was difficult and high kicks were always difficult to control.

After a further period of pressure Clifton were able to create another strong attacking opportunity and this time they forced their way over after a series of pick and drives. The conversion was successful and the hosts had opened up a 12-point lead.

To Henley’s credit they now had their best phase of play as they pressurised Clifton into conceding penalties which were kicked to corner. The dominant Henley line-out now took control and two tries were secured by Tom Emery as they drove forward effectively with a driving maul. Unfortunately neither conversion was successful and a score of 12-10 at half-time meant that it was game on.

The second half turned into a very lacklustre affair with both sides cancelling each other out. However, it was Clifton who produced two decisive pieces of play to seal the game. The first came after 25 minutes when a decisive break through the midfield produced a penalty under to the posts which was duly converted. This took the score to 15-10 in Clifton’s favour. At this stage Henley still had time and opportunities to win the game but once again inaccuracy crept in and Clifton were able to relieve the pressure.

The killer blow came with 10 minutes left on the clock when a clever kick in behind the Henley defence saw the Clifton winger win the race for the touchdown and open up a 10-point lead. Despite Henley pounding the Clifton line in the final stages they were unable to gain the valuable bonus point and Clifton held out for a well-deserved win.

This result has clearly dented Henley’s promotion ambitions but there are still some twists and turns remaining, but realistically they must now win the remaining games to remain competitive and keep the pressure on the teams just above them.