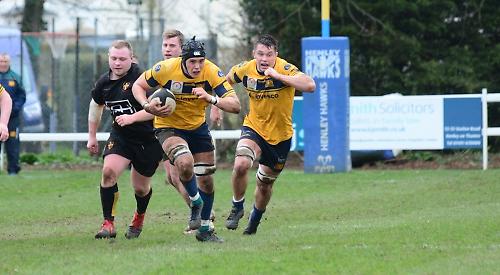 HENLEY HAWKS produced one of their best displays of the season with a resounding victory over Esher at Dry Leas on Saturday.

On a mild day, and with a dry pitch that suited their game, the hosts started the game with real purpose.

It was not long before they were rewarded with a try from their trademark driving maul, finished well by Tom Emery after just five minutes.

But it didn't take the visitors long to get a foothold in the game, and they hit back soon afterwards with a well-struck Tristan Roberts penalty.

There was a real intensity to Henley’s play in the opening exchanges and, with a new half-back pairing of Will Crow at scrum half and Ewan Fenley moving to outside half for the first time this season, they were causing Esher’s defence all sorts of problems.

Then a wonderful break from halfway by winger, Reuben Norville on the 10-minute mark which saw the Hawks stretch their lead further, although the tricky touchline conversion attempt was narrowly wide. With Henley now scenting blood, a penalty from Burrage was quickly followed by a third try from the increasingly dependable Will Janes, who was well placed to finish a great team try.

This setback spurred Esher into life, and they soon responded with a Sam Druce try.

With the visitors now in the ascendancy, a loose pass in midfield was picked up by Hawks flanker, Marcus Lowe, and some lovely interplay saw Norville over in the corner for his second of the afternoon, giving Henley a bonus-point try.

With Henley now running rampant, a fifth followed soon after with debutante, Will Crow finding Scotty White on his shoulder to cross the whitewash on the stroke of half-time.

The second half started with the visitors keen to put the first 40 minutes behind them and they hit back with a try from replacement, Jack Walsh. With Hawks centre, Xav Andre in the sin-bin, it was Henley who were galvanised by being down to 14 men.

A try from co-captain, Sam Lunnon all but sealed the victory for the Hawks.

A Dave Hyde try put the icing on the cake, but it was the visitors who finished the scoring in injury time with a consolation score from Joe Beckett.

It was an excellent win for Henley, but they know they will need other results to go their way if they are to make the top two from here.