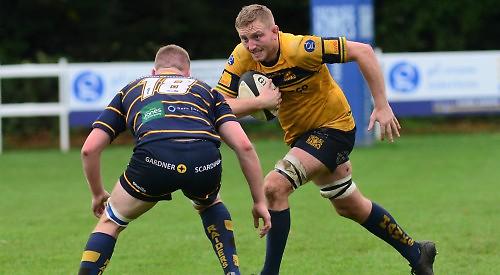 CO-CAPTAIN Jake Albon is among 10 Henley Rugby Club players to commit to playing for the Hawks next season.

Formal contracts have not yet been signed but are expected to be once rugby can be played again in the wake of the coronavirus pandemic.

When last season was brought to a halt by the RFU in March, the Henley Hawks were fourth in National Division 2 South with five matches remaining.

No date has been set yet for the new season to begin but players have sought to pledge their immediate future is at Dry Leas with more to follow.

Albon, who plays second row, is now in his fifth season at the club and is a master at Mousford Preparatory School.

Tom Emery, who plays hooker, is also in his fifth season at the club and has amassed more than 100 appearances.

Charlie Hughes, who plays prop, is now in his second year and his best performance came last year with a hat-trick of tries in one game before half-time.

Reuben Norvil, a pacey winger and prolific try scorer who was previously on loan from the Ealing Academy, has now joined permanently.

David Hyde, who plays second row, is now playing his fourth season and has amassed more than 100 appearances.

George Griffiths, a winger who has come through a series of injuries, is entering his third season itching to perform.

Will Crowe, who plays scrum half, joined Henley from Richmond shortly before the lockdown so has only played twice so far.

Jack Robinson, a pacey winger, is entering his third season and George Primett, who plays prop, is now in his fifth season with the club

Will Janes, who plays centre and fullback, has been plagued by injury recently, but is keen to put a marker down this season.

Will Bordill, a flanker with first class rugby experience, joined the club last year but a shoulder injury prevented a full season.

Alex Bradley, who plays number eight, is now starting his third season with the club.