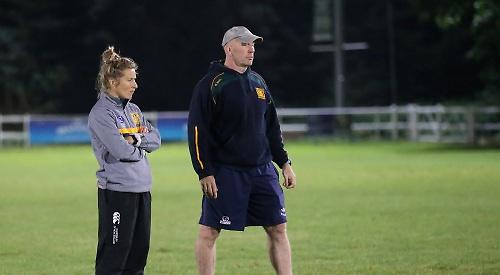 A FAMILIAR face has returned to lead the Henley Hawks Women’s team.

Alistair Mortimore has come back to Dry Leas as the women’s head coach following a four-year break, where he gained experience with Harlequins Women and Oxford University.

Mortimer, who lives in Henley, was previously in charge of the women’s set-up from 2009 to 2016. He replaces Joe Harwood, who was in the role for just under a year.

Mortimore said: “It’s an exciting time and great to back involved in a coaching capacity again at a time when the club are further increasing their profile and support around the women and girls’ section.

“The opportunity to lead this amazing squad and coaching crew we are assembling, in what is our 25th year, was too good to miss.”

Mortimore, 46, played more than 100 games as number eight for the Hawks men’s team, but had to stop playing when he was 32 due to reoccurring knee injuries.

Henley Women placed seventh in the Women’s Championship South 1 division last season, narrowly avoiding relegation after managing only two wins in 14 games. The side, which won the Intermediate Plate two years ago, had started well in their cup campaign with two wins from as many matches when the season came to an abrupt end in March.

Mortimore is keen to improve on their league record when his players are able to return to competitive action, which could be January at the earliest.

He said: “I watched a number of their games last season when I had the opportunity and I saw a lot of potential, particularly when they beat Loughborough in the cup.

“Unfortunately, everything got cut short and I knew there were some good players involved and I thought to myself ‘how are they where they are?’ given their potential.

“They shouldn’t have lost some of their other games. It is a question of the talent being there and identifying what is missing. We have an amazing coaching team with us this year and I’m confident we can turn it around.

“With the things we have in place, we have always strived to be the best we can be in the league we are in. We will always push for that. There are a lot of good teams in our league, so it is going to be very competitive. We want to keep up the momentum and keep the players motivated.”

While he was with Harlequins, Mortimore was the assistant coach of the women’s Premiership squad for three years.

During the same period, he was co-head coach of the women’s varsity and blues squad at Oxford University.

Should Henley be able to play competitive matches in the new year, Mortimore believes a top-four finish would be a realistic goal for the side and he is confident the players will make strides with the new coaching staff.

Bourke is the new forwards and defence coach, while Pocock is responsible for strength and conditioning, as well as being the backs coach.

A prop and hooker, Bourke registered 51 caps for Ireland and represented her country at the 2010 and 2014 Women’s Rugby World Cup.

Fiona Pocock played for England during the 2010 world cup on home soil and achieved 35 caps. The winger and fullback has previous coaching experience in East London.

The Hawks’ season was due to get underway in September, but the Rugby Football Union has said competitive rugby cannot be played until January at the earliest due to rising coronavirus infection rates across the country.

Mortimore plans to keep his players motivated by playing intra-squad touch rugby games every weekend and he believes team unity off the field has come a long way this year.

He added: “There is a lot of frustration, because some other sports are still allowed and rugby isn’t, but we understand that everybody needs to be protected. We are trying to do the best we can within the guidelines we are set, but the reason why we are frustrated is because everybody loves being there and it is always sad when you can’t play.

“We are not going to let that beat us and we will still keep the players engaged. We are in stage D at the moment and if we get to E we are closer to getting back to full time contact training. There was a potential for our season to start in the first week of December.

“We have done some work around the culture and team building. That means the girls are really focussed this year. Men bond during battle and women bond before battle; I’ve only ever really coached the women’s game and that is a fundamental building block that you have to understand.

“One of the great things about coaching them is that they really want to carry on their training and learning. They really want to keep going and some of them have just been thrown into rugby, so there is a lot of work we can do with them to help them to understand what it means to be a rugby player.”

Although promotion would be an even better outcome for the Hawks, Mortimore says it is important for the club to be realistic when it comes to setting targets.

He added: “As much as we have a history of being in the women’s premier division at Henley – and we are very proud of that – the cold reality is that we are not a big enough club. You have to have a full professional set-up and you can’t just dabble at it because it isn’t fair on the players.

“To even compete in the prem you need serious investment. Clubs like Exeter are having to put in half a million pounds and they are allowed up to £60,000 to pay players.

“The budget needed to do it properly with Harlequins was huge. For clubs outside of the prem, you can’t do that. I admire other clubs and their aspiration, but you don’t want to have a league where teams are getting walloped.

“It’s not good for the women’s game and it’s not good for the league. Women’s players are getting paid now – and rightly so – and it will get better the more media coverage gets involved. It is only because of the money TV brings in that all these sports accelerate.

“I know we are never going to get to the prem, so the best we will ever be is the league we are in — that means we have to try and be the best we can in this league. To say we are going to be in the prem in three years time is a fallacy.

“We’ve got links into some of those prem clubs and we will be a pathway, while providing great rugby for the girls at a very high standard without it being pro.”

Olivia Perry, director of women’s rugby ay Henley, said: “I feel lucky and grateful to have such a special and unique coaching team come together, and I’m excited to see what will be achieved this season.

“The progress made already through lockdown has been immense, and has built some strong foundations to do great things with the team.

“These will not only benefit the current squad, but structures are being put in to place that will be used by many players to come. We want to be continue attracting young talented players, so we can play our part in helping them through the pathway and reaching their potential.”