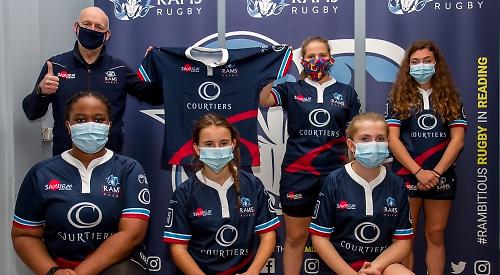 A HENLEY-BASED business have given a welcome boost to girls rugby in the area by donating new shirts to three age groups.

Wealth management company, Courtiers, based in Hart Street, unveiled the new kit for Rams RFC’s U13, U15 and U18 Sirens last week.

Among the girls who will benefit from the new kit is U15 Izzy Bruton, who goes to Piggott School in Wargrave.

She said: “We’re really happy to be given the new kit and want to say a big ‘thank you’ to Courtiers. We’re really excited for whenever we can play a few games.”

Her teammate and fellow Piggott School pupil, Lucy Simpson, added: “It’s a really nice new design and it should make us stand-out a bit more. Being back at the club, it’s been really nice to see people again after a long six months.”

Gary Reynolds, CFO at Courtiers and CEO at Rams, said girls and women’s rugby is a crucial part of the club’s future.

He commented: “I’m fully behind ladies rugby, but perhaps even more so my wife (Cath) is, so as a club we will have to make it happen!

“The development of the female sides here has been tremendous and it was the one thing which was missing from the club six years ago.

“The girls’ teams deserve the new kit because they’ve worked really hard, and anybody who has watched them, they take their rugby seriously just like the boys do. There are some really good skills in those teams.”

He continued: “I’m really excited about the future for Sirens rugby and hopefully in the longer run we’ll be running two (adult) ladies teams — one perhaps slightly more social and one perhaps elite and competitive. That would be a fantastic achievement for the club.”

Junior Sirens co-ordinator, Luke Simpson, added: “I haven’t got the words to say how grateful I am to Courtiers and hopefully when they see the smiling faces of the girls playing in games, that is where the payback will come.”