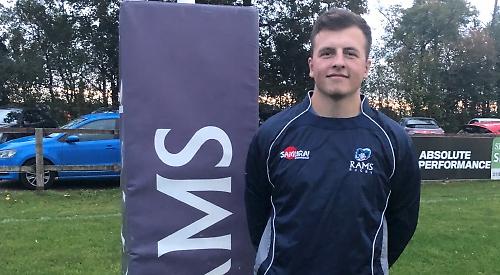 NEW Rams signing Paul Schroter has promised to do whatever he can to help the club scale new heights, writes Richard Ashton.

The 22-year-old back row joins the club having skippered Exeter University to second place in the BUCS Super Rugby league last season, and has also represented England Students alongside former Ram, Will Partington.

He said: “Having left university I want to keep playing at a high level so I approached Rams because I was really impressed by the facilities and the way they play.

Speaking about his career to date, he added: “I really enjoyed my time at Exeter and being asked to captain them was a huge honour to lead those boys on to the field.

“Representing England was also a highlight of my career to date and very special.”

Reflecting on what he hopes to bring to Sonning’s Old Bath Road, Schroter revealed: “I like to lead from the front. I like to defend, getting off the line and making some chop tackles and big hits.

“In attack I really like to carry, get on the front foot and over the gain line. I really enjoy the physical side.”

He concluded: “I want to make sure I can help the club on and off the pitch, whether it be playing or supporting guys who have the starting jersey, I want to work as hard as possible and help Rams to as much success as possible in the future.”

Director of Rugby, Seb Reynolds, is delighted to have Schroter on board and said: “He’s had an excellent career at Exeter, he’s got a good CV and he works really hard. He showed an interest in joining and hopefully he’ll develop his rugby here and be with us for a long time.

“He’s a good player, a hard worker and a really nice guy, which is important. I think he’ll fit in well.

“It’s nice to add players in positions where we are already strong because no player has a given right to be in the side. Further competition for places is great.”