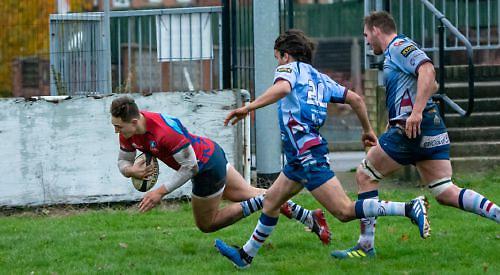 CONNOR Hayhow believes his debut season with Rams “helped him enjoy rugby again” as he bids to kick on whenever the sport can resume, writes Richard Ashton.

The young centre scored eight National Division 1 tries last term, including a hat-trick at Rotherham and a brace at Canterbury a fortnight later.

The former Bracknell junior, who later played for Henley Hawks and switched from London Scottish at the start of last season, also scored in his final two games against Old Elthamians and Cinderford before the RFU called a halt to proceedings as the coronavirus pandemic took hold of the country.

While the governing body confirmed on Friday there will be no competitive league action below the Championship this season, there is still hope of a regionalised cup campaign starting in January.

And reflecting on last year, the former England Counties U18 man said: “It was really enjoyable. It was nice to be fresh and back enjoying rugby again, playing week-in, week-out with the boys and I just loved it. We had a great laugh.

“As soon as I met the lads and the same with (director of rugby) Seb (Reynolds) and the other coaches, it was a no-brainer in terms of being here.

“I knew from the start it was going to be enjoyable and I certainly wouldn’t change it.”

While talks are ongoing between the Government, the RFU and the NCA to finalise what kind of season is to be expected, Hayhow has been stunned by the number of players at training and revealed what he hopes to achieve.

He said: “I don’t think anyone really expected to have so many, but week-on-week we just keeping getting people here and I think everyone’s just glad to be back.

“I’m looking forward to getting back out there and the attacking style of rugby we had, and hopefully picking up a few more tries.

“But I’ll also be looking to sort out the defensive side of my game which [defence coach] Danny [Batty] is constantly badgering me about.”

Hayhow is part of one of the most competitive positions in the club, with the experienced Andrew Humberstone and Stevie Bryant having starred last season alongside the more youthful Ellis Jones and Kieran Leicester.

And he believes the competition for places plays a huge part in driving standards forwards.

He concluded: “It’s brilliant to have the quality of centres we do — you never know if you’re going to be in the team or out of the team so you’ve always got to prove yourself at training and the games.

“It’s great to look at Drew and Scuba who’ve been at the top of their game for the last nine to 10 years – they’re fantastic for me to learn off.”