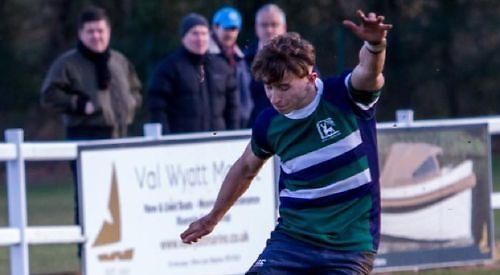 YOUNG Rams’ fly-half Jack Gapper has vowed to use the delayed start to the 2020/21 season to keep improving himself for when rugby can return.

The talented teenager switched from the Bristol Bears Academy to Old Bath Road last season and impressed for the Titans (second XV) as well as Berkshire under-20s.

While the RFU cancelled the league season for all levels including National One and below last month, they have revealed plans for a cup competition if the ongoing coronavirus pandemic eases at the beginning of next year.

Despite having to wait for a return to action, Gapper said: “I’ve been keeping myself motivated and while the delayed start is frustrating, we’ve got to move on from that and I look at it as being extra time to improve myself. Everyone’s so keen and that makes it really enjoyable and there’s also a competitiveness at training which improves everyone.”

While group training is currently on hold during the second lockdown, Gapper has learnt a lot since joining the club.

He said: “Going through the years at Bristol Academy things got harder as you went up but this is a senior set-up and the game is played differently.

“But everyone at Rams is brilliant and I can’t fault anything. Coming from Bristol to here is a bit of a trek, but it’s not a problem as everyone is so welcoming.

“There are good banter levels everywhere and I’ve been enjoying the training and the gym. Coaches Joe Southwell and Daryl Watson have really helped me out, although it’s been a real challenge. Hopefully I’m growing into it.”

While Rams’ supporters will have to wait a little longer to see Gapper in action, he gave a hint of what he hopes to bring to the club in the years to come.

He said: “I like to be reliable and show that to all the boys so they build trust in me. When I do get an opportunity I’ll be looking to perform and then go from there.”