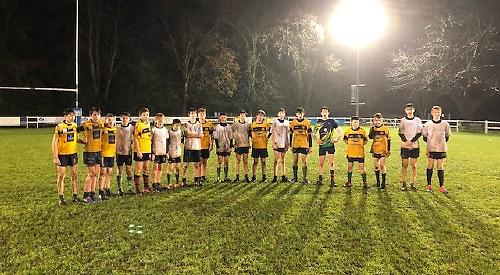 In the U14s fixture, the first period of the game was dominated by hard running and aggressive defence as the players enjoyed their return to contact rugby.

Debutant Cameron Ball showed what a welcome addition he is to the squad with some outstanding tackling from full back. The deadlock was broken by another debutant, Harvey Herbert, who evaded Charlie Baker and Finn Hawkes to speed over for the Whites.

After the restart, the game was an open contest with Tom Yeoman and Will Corbett managing to find space through the halfback channel and scoring two quick tries for the Whites. Winters responded after being put into space by Angus Spencer and Charlie Ashford to charge through the centres to score his second.

Hard-working winger Archie Stickley then scored the try of the day following a fine run from Herbert.

The Whites then began to dominate further with Conrad Morley impressing at scrum half and Toby Shemilt scored from a rampaging run before Laurence Walker set up Ashton Ilinic to finish off the game, diving over the line just before the final whistle. With conversions being introduced for the first time at the under-14 age group level, the Hawks’ coaches were particularly pleased with the composure and accuracy of both place kickers.

Winters was successful with each of his three kicks, while Ben Horner kicked four from six for the Whites to triumph 38-21.

Meanwhile, the Henley Hawks U13s were missing a number of players but still managed to put out three teams of nine to play Maidenhead’s visiting squad.

The games were played in a round robin style of 20 minutes per match with nine fixtures played. Once Henley got used to the physicality in the rucks most of the games were either close affairs or won comfortably.

Maidenhead were extremely physical and had a few players strong in the tackle.

Stand-out players were George Bottomley, who brushed people aside at will, Alistair Hall, who generally cleared two people out of each ruck, and Alexander Clarke, who controlled the tempo of each game with strong passing and running.

Henley notched up six wins and a draw with only two defeats.