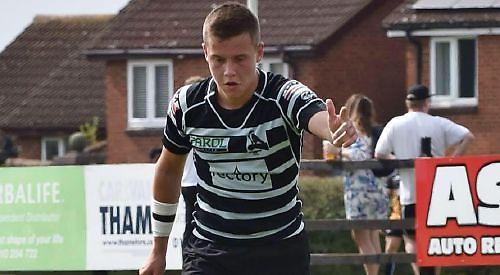 YOUNG fly-half Sam Nicholls cannot wait to finally play some rugby — with the possibility his first game for Rams could come against his boyhood club.

Having returned from travelling and playing rugby in Australia, the ex-Chinnor age group captain signed on at Old Bath Road and has been training since last pre-season, only for the ongoing coronavirus pandemic to mean he has yet to put on the shirt.

With the announcement this week of two matches with Rams’ neighbours next month, Nicholls has reflected on his time with Rams to date.

He said: “It’s been a bit weird, but it’s obviously nice to be back now and I’ve thoroughly enjoyed getting to know everyone. The players and coaches have all been so welcoming, especially having come over from Chinnor. I’m just looking forward to playing some proper rugby now and hopefully that won’t be too long.

“There’s a great set-up here with a settled senior squad and, having grown up playing against Rams, I always enjoyed coming here.”

Nicholls is looking forward to a fresh start. He said: “I like to lead the team around despite being a young guy — I captained Chinnor in the age groups so hopefully I can bring those leadership skills, which I guess naturally comes with playing fly-half. I like to have a go, play with a smile on my face and have fun.”

Rams will play their first matches in more than a year when they take on Chinnor in two fixtures next month. The home-and-away double-header will see the first game at Old Bath Road on Saturday, May 22 before Rams head to Kingsey Road the following week.

The matches will be played under the RFU’s adapted laws, which mean there will be no scrums or mauls permitted.

Seb Reynolds, the club’s director of rugby, said: “We’re really excited and it’s great Chinnor want to have a couple of games in what are always good local derbies. It should be fun”.

The two sides played out two National One encounters last season, with Henry Bird’s last-minute score earning Rams a 27-21 home win, while they also held on for a 21-18 success despite a Chinnor comeback in the away clash.