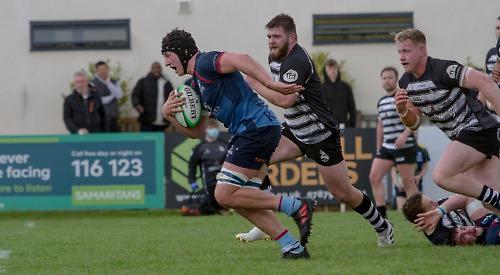 Remarkably, five of their 16 debutants crossed the whitewash — the outstanding Paul Schroter going over twice — as the hosts secured a highly impressive victory.

Fergus Taylor, Will James, Ollie Monye and Steffan James also dotted down on their maiden appearances, while Josh Collis also got on the scoresheet.

Reynolds said: “It was very encouraging. In the inclement weather with showers coming in, I thought some of our continuity was excellent and it’s how we like to play the game.

“Some of the new guys coming in really bought into that and there was a real hunger to keep the ball alive, and by doing so we managed to run in a couple of scores against a very good Chinnor side.

“I thought a highlight was Paul’s second try midway through the first half with Fergus, Paul and Ross Crame — who was excellent — combining.”

Rams played with a controlled frenzy for the majority of the 70 minutes due to the adapted laws of no scrums or mauls it was agreed to play 35 minutes each half.

Reynolds said: “Early on we gave away a few penalties and we were very, very eager at the breakdown which is something defence coach Danny [Batty] wants to work on — introducing a couple more jackalers into the side — and because everyone’s been working on it they wanted to try and do it. But we found a happy medium with it moving towards the end of the first half and in the second we took that on. Our decision-making got better during the game.”

With five debutants grabbing their first Rams’ tries, Reynolds believes it was a due reward for the effort they have put in.

He said: “They’ve all been great in training and it’s nice to see them run out in the shirt and have the added bonus of scoring some tries.

“It’s important not to get carried away and Saturday was about returning to the game we all love, but the early signs point towards some very healthy competition in the squad and that’s what we want to achieve.

“Everyone in the group should want to be better come the start of pre season.

“This club is about promoting healthy competition, giving guys opportunities when they really want to work for the shirt and hopefully we’ve got the makings of a decent squad.

“It’s just the first run-out, but I’m quite happy.”

And with a crowd approaching the 50 per cent capacity permitted by Government guidance on the latest easing of lockdown restrictions, Reynolds paid tribute to the supporters. He said: “It was absolutely brilliant to have the Ramily back.

“There was a real buzz around the place — when we got a line break you could hear the cheers and energy they give the players and it was just great to welcome people back.”