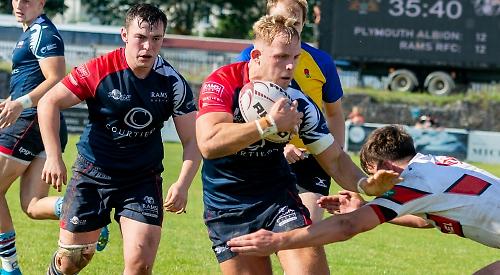 SEB Reynolds said his Rams players should be really pleased with themselves after earning a third consecutive National 1 bonus-point win with a
26-19 success at Plymouth Albion, writes Richard Ashton.

The visitors led 12-0 through tries from Henry Bird and Ollie Moffitt after an excellent opening 25 minutes, but were stunned by two quick-fire scores from Alex Ducker and Setareki Raumakita which levelled matters.

A converted Ellis Jones try made it 19-12 at the break, and Drew Humberstone then added the extras to a Connor Stapley score to extend the advantage to 14 points.

But Plymouth rallied late on and in front of an increasingly vociferous crowd, cut the gap to 26-19 as Tom Putt slotted a conversion after Frankie Nowell’s score in the right-hand corner.

Yet despite being reduced to 14 men late on following an Ant Marris sin-binning, Rams held on for a superb victory.

Director of rugby Reynolds said: “It was a real rollercoaster of a game — both sides had periods of dominance.

“At times we invited their dominance onto us, but there were large parts of the game when we looked very good.

“I was really pleased with how we were playing, we were getting in the right areas and with some good tempo.

“We put pressure on them, especially early on, but then we dropped off a couple of tackles and made a couple of poor decisions on exit, which allowed a dangerous side back into the contest. But we then wrestled control back.” He continued: “They fought hard in the second half, but I’m incredibly proud of our lads.

“Just three games into the season and we’ve had a tough trip down to Plymouth — a place we’ve never been before — and it was a really good performance.”

Rams gave first starts of the season to hooker Ollie Moffitt and second row Ollie Taylor, and along with captain Robbie Stapley, Reynolds praised the trio.

He added: “I thought Ollie Moffitt was brilliant — he’s not had much National 1 rugby this season, albeit he finished the last full season in good form. He deserved his chance to come into the side and did a fantastic job.

“Ollie Taylor was brilliant and really put their line-out under pressure, and there was a great shift from the skipper, who really found some form.

“He’s a class captain and was absolutely magnificent.”

And Reynolds lastly commented on the test Plymouth will pose throughout the season, despite Albion falling to a third defeat.

He added: “This is such a good league and our players love it. The crowd were enjoying it and you’ll have to be a good side to come down here and win.

“Plymouth are a historic club with a big following and coming here for the first time, you have to get used to the surroundings, but the guys should be really pleased with themselves.”