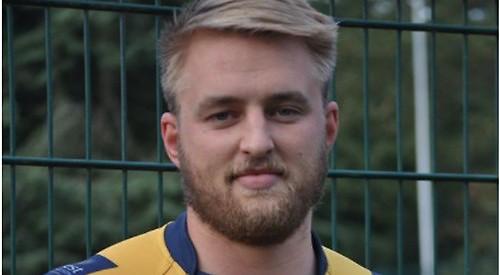 THE head coach of Henley Rugby Club has praised the courage of his players after they won their first match since the death of a team-mate.

Luke Allen said the narrow victory over Clifton at Dry Leas on Saturday was a fitting tribute to David Hyde, the lock forward who collapsed after the Hawks’ home game against Old Albanian on September 4.

The match took place only a day after his funeral was held at North Oxfordshire Crematorium in Kidlington.

There was a minute’s applause before the 3pm kick-off for which both teams lined up together with Henley’s third team the Vikings and their opponents Reading 2XV, who were playing on the pitch over the road.

The Clifton team then presented the home side with one of their shirts with the player’s nickname “Hydey” on the back. His Hawks number 5 shirt has been retired for the season by Henley.

The home side went on to beat Clifton 28-27 in the National League 2 South match thanks to a last-minute penalty kick by James Love.

Mr Allen said: “The end of the game was tremendous for us. It was the last kick of the game and was pretty special.”

Sam Lunnon, who spoke at the funeral, scored the first try of the match while wearing a shirt with no number in memory of Hyde.

Mr Allen said: “Emotions were running high. I was behind the posts when Sam scored and everyone just bundled on top of each other and it was a lovely moment

“The boys were charged and there was a lot of emotional energy. We said before the start of the game that it would take us through the game, win or lose.

“It was about playing for Dave and for each other. This whole process has been for Dave. His death has been a reality check that rugby isn’t a given, just like life.

“Being able to have the opportunity as players to represent Dave was important and we wanted to play a standard of rugby that he would have been proud of.

“We managed our emotions to the best of our ability and harnessed that.”

Mr Allen thanked Clifton for making the day poignant for Hyde’s family and the spectators. He added: “Obviously, the day was about Dave but I think Clifton really stepped up to the mark and showed a lot of respect.

“They presented our captain Jake Albon with a shirt, which was a really nice touch.”

Hyde, 27, from Faringdon, complained of being in pain after Henley’s opening match of the season. He was taken to the club’s physio room but his condition deteriorated quickly and he was taken by air ambulance to the John Radcliffe Hospital in Oxford, where he died overnight.

Hyde, who was known as a “gentle giant” left his wife Katherine, who is responsible for the Hawks’ social media, and their young son, Tore.

Henley Rugby Club has set up an online fundraising page to support his family, which has raised nearly £84,000. The Hawks’ next two games after his death against Hinckley and Redruth were postponed as a mark of respect and training sessions were cancelled.

These two matches will be now played on November 6 and February 5 respectively.

Nigel Dudding, director of rugby, said: “The whole club has been completely overwhelmed by the outpouring of support and kindness following David’s tragic death.

“The sensational response of the community and rugby supporters to our crowdfunding appeal has meant that the target has been extended three times.

“We extend our heartfelt condolences to Katharine, Tore and the whole family at this difficult time but we will all remain strong and David’s legacy will live forever.”