Henley Hawks on the up 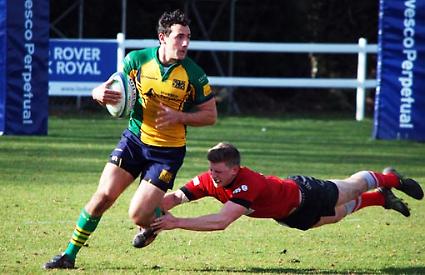 After their convincing victory against Wharfedale the previous week the Hawks approached this game with some confidence.

From the start the big Blaydon pack stamped their authority on the sets scrums. They had more than a nudge on the Hawks from the start on their put in and they succeeded in taking two heels against the head.

It was therefore not a surprise when from a catch and drive influential number eight Jason Smith was driven over for a try which Andrew Davies, stand in fly-half for Andy Baggett, failed to convert.

This early set back could well have been worse but for some impressive tidying up in the back row of the scrum by number eight Matt Payne.

The Hawks collected good ball from their line outs and this gave them the opportunity to create their favoured running rugby.

Scrum-half Luke was able to make useful breaks particularly down the blind side and he was also able to release fly-half James Comben who found four or five gaps in a cumbersome defence fairly close to the scrum. Playing head up he eluded Blaydons front five.

However, it was a blind side break by Carter which set up the first try of the game for the Hawks. He linked with right wing Xavier who scorched in from 30 metres for Comben to convert and put the Hawks 7-5 in the lead.

Now the Hawks were able to carve holes in the visitors defence. Next it was Comben again that created space for fullback Ed Yarnton, always quick to exploit opportunities to score, to touch down against his former club. Combens conversion attempt drifted wide so did the attempt to improve on his own try five minutes later. He made the line when supporting a move down the left where a side step took him through the cover.

The Hawks 17-5 lead was improved four minutes later when Blaydons defence was caught off-side in front of the posts for Comben to kick a straight forward penalty.

A 20-5 lead with already three tries in the bag promised well for the Hawks in the second half with a try bonus point in view.

Although they started the second 40 minutes well and had opportunities on three occasions to build on their lead, careless play threw them away. This was particularly true when the Blaydon defence was full stretched but an ill-advised attempt to kick through meant that it came to nothing and from there on the Hawks were reluctant to stretch what had been a vulnerable Blaydon defence in the first half.

Playing a more static game played into the visitors hands. This was true despite changes to the Hawks front row with the introduction of Dave Manning and Ian Williams that led to them securing stability in the set scrums.

Blaydon quickly took advantage of the change in tempo when their experienced lock Chris Wearmouth cashed in on a drive over the Hawks line. The score was now 20-10 as the conversion attempt was well wide.

Much of the remainder of the game was a struggle for the Hawks defence although they covered well and the tackling of Danny Wells was a feature. They prevented Blaydon scoring from a third drive although Davies converted a penalty from in front of the posts.

The best attacking moment for the Hawks came when Xavier put in possession on the half-way line and made a side stepping swerving run which was stopped by the last line of defence on Blaydons 22 metre line. Man-of-the-match Comben gave the Hawks the comfort of a 10 point lead after 60 minutes with a straight forward penalty.

There was no further scoring as the Hawks sat on their lead to record an important victory although a dash down the left touch line by Tom Grimes looked as if the lead would be reduced to three points with a try under the posts had the assistant referee on the spot had not seen him put a foot in touch.