Rams looking to bounce back quickly after first defeat of season 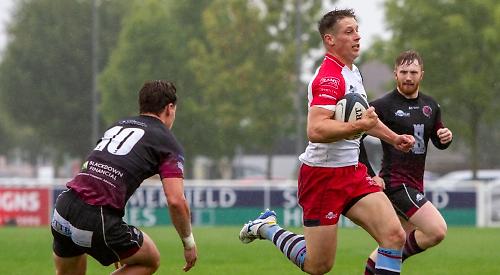 RAMS Director of Rugby Seb Reynolds believes the pressure is all on National One table-toppers Rosslyn Park when they visit Old Bath Road on Saturday (3pm), writes Rich Ashton.

A gut-wrenching 18-17 defeat at Taunton Titans — sealed by a Gary Kingdom penalty with the last kick of the match — ended Rams’ unbeaten start to the season and saw them drop to third in the standings after five matches.

But Reynolds believes the arrival of high-flying Park is the ideal fixture for Rams to try and bounce back, with a bumper crowd expected for what should prove to be a thrilling encounter.

He said: “We’ve had a fantastic start to the season and Rosslyn Park is really exciting.

“There’s no pressure on our lads and there is on them — they’ve made no secret of the fact they think they should be in the Championship.

“They want to go up, they’ve recruited heavily, they’ve got star players and so it will be really interesting to see how we can go.”

On a wet afternoon in Somerset last Saturday, Rams had responded terrifically to a Kingdom penalty as two Ellis Jones tries and seven points from the boot of Drew Humberstone had the visitors 17-3 up early in the second period, but Sean McDonnell-Roberts and Ben Henderson were both then sin-binned as Titans hit back before snatching victory right at the death.

Reynolds said: “It was disappointing, but you can’t take away from the fact the guys put in a huge effort and for large parts of the first half and chunks of the second we were excellent.

“We controlled the game and felt we had the ascendancy in the maul, we were constantly going forwards. Taunton were excellent and came back really well in the second half. We reacted really well to the sin-bins, albeit the ideal scenario is you don’t get them — we probably lost the referee a little bit in the second half and we were punished.

“I think if we’d got one more score early in the second period we could probably have controlled the game from there, but this is why this league is outstanding.”

To try and avoid delays entering the ground for the Rosslyn Park game, supporters are asked to pre-book tickets via www.ramsrugby.com